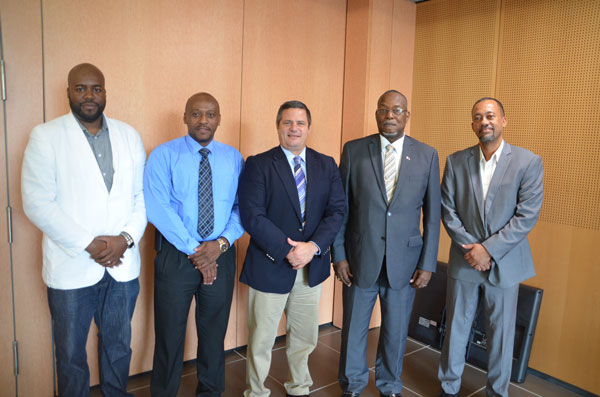 PHILIPSBURG:—Interim Minister of Aviation Affairs Rafael Boasman and members of his cabinet has been busy of a late meeting on several issues regarding aviation, setting in motion action points to achieve the goals of the Ministry.

The most recent meeting was with Matthew Cummins of the Transportation Security Administration (TSA) of the United States. Cummins is the TSA representative for the Dutch and French Caribbean, Venezuela, Ecuador, Guyana, and Suriname.

Cummins was on St. Maarten to conduct several inspections and praised St. Maarten, more specifically the airport, for its usage of new technology including the extensive used of body scanning security machines which he said is unmatched in the Caribbean.

He used the opportunity to brief the Minister on the role of the TSA and how that relates to St. Maarten obtaining US pre-clearance status. Establishing pre-clearance facilities for a new territory is not something that happens quickly and requires strict adherence to regulations and policies before going into effect.

The airport has to make structural changes to accommodate pre-clearance as well. Manager of Operations at SXM Airport Michel Hyman was also present at this meeting to brief the Minister on the airport’s activities in preparation for pre-clearance which, if all goes as planned, should be ready next year. Cummins said St. Maarten is “a stone’s throw away from equivalency.”

Also discussed during the meeting was two possible agreements the TSA would like to finalize with St. Maarten; a Federal Air Marshall (FAM) agreement and a MOA (Memorandum of Agreement) that would, among other things, provide TSA technical assistance to the airport. Both agreements will be further discussed.

The Cabinet of the Minister has also recently met with Head of the Civil Aviation Department Lou Halley to get an update on the functioning of the department (staffing, technical needs ect) as well as the process of St. Maarten re-acquiring its Category-1 aviation status. All efforts will be put into reaching that goal in the shortest possible time once the department is brought operationally up to par.