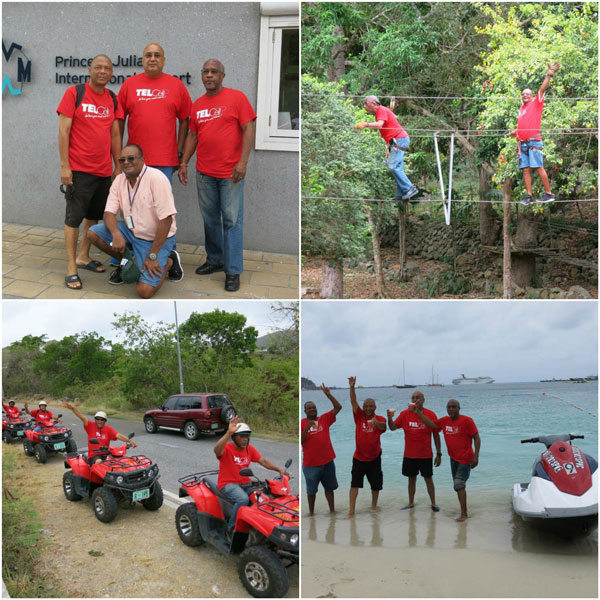 Pond Island:— TelCell Father’s Day SMS prize winners collected their fun prizes at the weekend and all agreed that their day of adventure was nothing short of a blast.

Proud dads, Victor Peterson, Danny Hassell, Nigel Leslie and Herman Cramer made it a Dad’s day to remember Saturday by hopping on a plane ride, touring the island on 4 x 4 quads, scaling the zip-lines at the Lotterie Farm and whizzing at high speed on jet skies in the Great Bay area. A Fifth prize-winning dad, Mr. Saintart Jean Eddy unfortunately could not join the party on the day.

The dads had time for a spot of lunch and a toast with TelCell organizers and coordinators at the end of what turned out to be a really grueling day.
According to one of the fathers, Danny Hassell, the series of events gives you a different appreciation for all that the island has to offer visitors and residents alike.
“You get a totally different perspective of the kind of fun activities that are all around us waiting to be enjoyed” said Mr. Hassel.
All the dads thanked TelCell for a great SMS promotion which gave a brand new meaning to Father’s Day for them and also to the loved ones and family members who nominated them for the winning prizes.
Coordinator, Grisha Marten said the day began well and ended on a very high note for the dads, who like the mums a few weeks before, were able to enjoy an extra treat for Father’s Day this year because of the TelCell promotions for both occasions.
“The mothers appreciated what was done for them, but I think the dads appreciated it even more because they often complain they are forgotten – but certainly not this time,” joked Grisha.
She said TelCell customers can look out for more fun promotions in the coming months and especially with the run-up to Christmas when other SMS offers and raffles will be up for grabs.