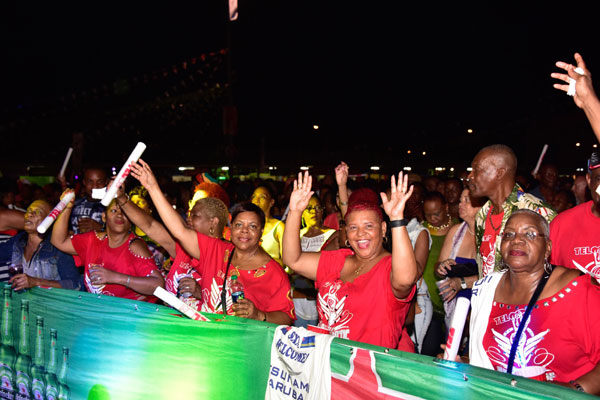 Pond Island:— Saturday’s TelCell Night of the Hit Makers flagship carnival event has been hailed a “huge success” by the company’s commercial chief, Brian Mingo and also by hundreds of music fans who attended the event.
Thousands turned out at the Festival Village on the night of the event all decked-out in Night of the Hit Makers T-shirts and sporting the company’s promotional red colours.
“It was a great and successful night, for which we want to thank members of the public, TelCell’s loyal customers, our team of volunteers and especially the promoter, “Mr. Rude” for doing another fantastic job of bringing top class entertainment to St. Maarten,” said TelEm Group Chief Commercial Officer, Brian Mingo in an invited comment Monday.

He said during the concert itself and from the start of this week, he has been receiving nothing but praise from people who attended the event and had a thoroughly enjoyable evening.
“It was good to see people in our community from all walks of life sharing the dance floor and just losing themselves in the enjoyment of the moment, which leaves us very proud to have sponsored and hosted such a prestige event at this year’s Carnival,” continued Mr. Mingo.
He is especially grateful to members of staff who worked tirelessly in the days leading up to the event and on the show night itself, making sutre that it turned out to be the success it was.
The sentiments were also expressed by promoter, Berteaux “Mr. Rude” Fleming, of Xtratight Enternment, who said Saturday’s success is the result of his excellent partnership with TelCell and also because of the support of St. Maarten music fans and members of the public, without whom there would be no show.
“I keep saying our relationship and partnership with TelCell is like St. Maarten’s best Guavaberry – the longer it soaks, the better it is,” said the promoter.
“Kes the Band was outstanding, so was Jean Marc and our own Control Band really had everyone rocking – in fact all the performers just took our show to another level so that we can start preparing for year five and reach another level still,” continued “Mr. Rude”.
He once again thanked music fans and the general public for their support, also his own team and the TelCell team who collaborated seamlessly once again to Make another Hit Night.