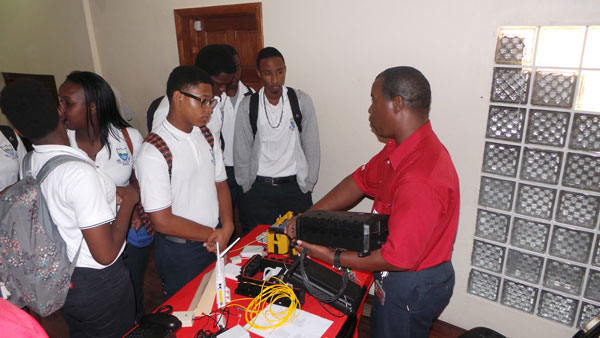 Pond Island:— TelEm Group personnel were on hand at the Belair Community Center recently, where a Career and Study Fair was being held for St. Maarten Schoolchildren heading for universities and colleagues at home, in the region and further abroad. The event was the annual St. Maarten Career & Study Fair, which took place November 2.

Each year, the Career & Study Fair brings together hundreds of school children from secondary schools around the island, to exchange ideas and obtain information with the island’s leading private and public sector companies. The information is especially important to the students when making their choice for which university or college they will attend and what they can expect as a course of study so that they can achieve their own career goals.

According to Carmita, many questions were asked and many answers were given, with a great number of students showing keen interest in a career in the telecommunication industry.

“A lot of the students wanted to know about the different divisions of TelEm Group with specific questions about the activities and tasks that take place in these divisions,” said Carmita.

“We are looking at the next generation of TelEm Group workers, so we did our best to give them as much information as we could so that they can make their own informed decisions about where they want to go and what they want to pursue as a future career,” said Carmita, who was also pleased to give some information to the new generation about the old days of working at the company’s forerunner, Landsradio, and also about the old technologies such as Telex and cablegrams, that existed at the time.

She thanks, management of TelEm Group for allowing staff to participate in the Career and Study Fair and her colleagues for collaborating on a satisfying and worthwhile project.