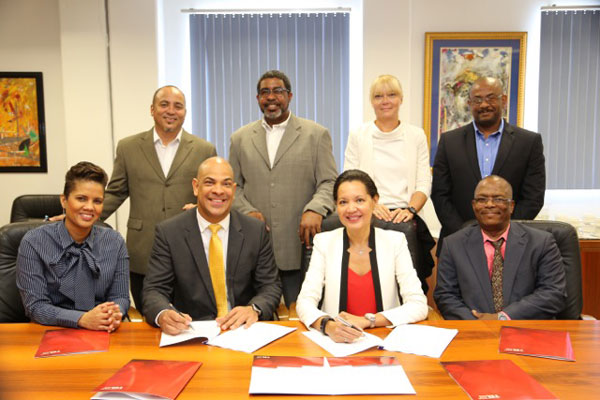 The Bond issue is being utilized by TelEm Group to finance future capital expenditure and refinance current debt obligations. This bond supplements a Euro 8 Million loan obtained from the European Investment Bank (EIB) last year for an island-wide Fibre to the Home project in St. Maarten.

In RBC Merchant Bank’s case, the Bond arrangement entailed delicate negotiations with six major investors, who are together providing the capital necessary for the Bond. This is the second time that the TelEm Group has successfully approached the regional capital markets to secure large funding from regional investors.

“I am very grateful to the TelEm Group for its confidence in RBC’s ability to deliver on this undertaking and to all of the parties that made this transaction a success, especially the investors, whose proceeds will assist the TelEm Group with achieving its corporate objectives,” said Mr. Boissiere.

He continued, “the RBC Group has maintained a long-standing relationship with the island of St. Maarten highlighted by several large corporate transactions for Princess Juliana Airport and St. Maarten Harbour. We are very proud to continue this relationship through this Bond issue for the TelEm Group and continue the path of further enhancing the telecommunication infrastructure of the island.”

“RBC takes pride in its regional scope, its broad network of institutional partners and international expertise in arranging financing throughout the Caribbean region. It continues to be a leader in structuring financing for multiple sectors including but not limited to Governments, Telecom, Hospitals, Utilities, and Ports”, concludes the RBC official.

According to Mrs. Etnel, the Bond and consequent loan arrangement means TelEm, Group, in essence, has been able to renegotiate more favourable terms and conditions and will now be accountable to one company via a trustee, then to several financiers as before.

“We are most thankful to RBC Merchant Bank for their patience and hard work in securing this bond arrangement and look forward to a continued relationship ,” said Mrs. Etnel.

Mrs. Etnel further thanked TelEm Group consultant, Mrs. Marit Beishuizen for her “outstanding” contribution with the coordination of what was in actual fact a very complicated arrangement.

“There were many elements that had be to monitored and coordinated with various lawyers and financial institutions, so Mrs. Beishuizen’s role in managing the entire process was critical to its success and the mutually satisfactory outcome,” added the Chief Financial Officer, Mrs. Etnel.

A gathering will be hosted in the coming weeks with the transaction parties and investors to celebrate the Bond issuance and recognize the effort and support that contributed to the success of the transaction.

RBC has informed that it will be hosting a gathering in the coming weeks with the transaction parties and investors to celebrate the Bond issuance and recognize the effort and support that contributed to the success of the transaction.