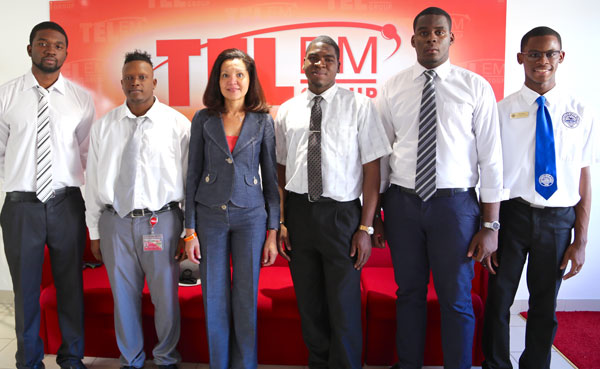 Pond Island:— TelEm Group has given another shot in the arm to the University of St. Martin School of Continuing Education and Life Long Learning (SCELL) by nominating two employees for scholarships under the establishment’s Young Professional Network (YPN).
Cashier, Ricardo Generelette, and Tech-Customer Support, Kurt Illis, will both receive TelEm Group scholarships to study Accounting and Business Management and Business Management respectively at USM come the start of the new term in August.
They will be doing so in a general effort by SCELL to boost male enrollment at USM for the 2016 academic year.
During a brief ceremony at the TelEm Group main building on Pond Island Wednesday, both recipients, thanked TelEm Group and Chief Financial Officer, (CFO), Mrs. Helma Etnel for the investment the company is making in their education.

Both vowed to make good use of the opportunity and to achieve good results.
During the ceremony, Richardo and Kurt were both congratulated by Mrs. Etnel on receiving their scholarships and Mrs. Etnel wished them both much success in their studies.
According to Mrs. Etnel the investment being made is not only in the individuals concerned but also in the company itself, since their new skills will also be utilized within the company in the short and long term.
Both TelEm Group scholarship recipients were also congratulated by representatives of Young Professional Network, (YPN) including YNP Vice-president, Dickson Nerette, YNP President, Javid Hurtault and YNP board member, Kharl Oliver.
YPN says there are currently 37 males enrolled at USM with the program firmly set in its goal to increase that number to 57 with the help of local businesses including TelEm Group.
“The program is specifically designed to empower USM males to become mentors while simultaneously pursuing their academic dreams and encouraging others to pursue degrees at USM and UVI at USM,” says program founder Dr. N. Gittens.
Dr. N. Gittens, says businesses donating to the program will be invited to an awards ceremony planned for early August to present scholarships to the male recipients.