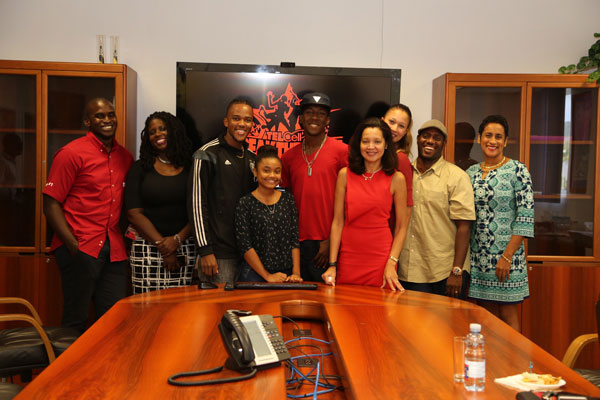 Pond Island:— TelEm Group Chief Financial officer (CFO) Mrs. Helma Etnel has given instructions for the company’s marketing team to go “all out” with their promotion of a new music video being released this week by winners of the 2015 TelCell Breakthrough Youth Talent Search.
Mrs. Etnel made the pledge after viewing the first showing of the music video “Believe in Love” along with the Breakthrough artists, Lian Borsje, Rumari Rogers, Kyanni Atmopawiro, and Paul Brown, their parents and guardians, coordinators and volunteers of the TelCell breakthrough event, and TelEm Group management and staff.
“Believe in Love” was co-written by Rumari Rogers and Berteaux Fleming, with Aldi Farrell on bass guitar and Paul Brown on beatbox. It was recorded, mixed and mastered at Rock N’ Vibes Studio.

“I am totally impressed and proud of you all for doing such a fine job and showcasing the wealth of talent that we have on St. Maarten,” said Mrs. Etnel.

She said the company has many resources that can be used to assist the youngsters in the promotion of their new video locally and also internationally and she urged her staff to assist where they can since promotion of the TelCell Breakthrough winners is also promotion for all talent on St. Maarten.
“We are very lucky to have discovered your talent and to give you a taste of what you can achieve with that talent, I just hope when you are performing on the world stage, maybe in New York or Las Vegas you will remember to ask your audience to buy a roaming chip from St. Maarten,” Mrs. Etnel joked.
The music video viewing was well received by everyone with many expressions of delight in being involved with the project, from the music video producer, the artists themselves, their parents, TelEm Group coordinators Cheryl Rismay and David Evans, and TelCell Breakthrough co-coordinator, Mr. Berteaux “Mr. Rude” Fleming.
According to Mr. Rude the young performers were once again a joy to work with, being very young, but also very professional in their work and toward their goals of first making a CD and then the music video.
“The talent we have on this island is just amazing and this group is once again showcasing that talent and drive in our youth,” continued Mr. Rude.
Other co-coordinator, Angel Richardson, thanked the parents for their full support and dedication when it came to transporting the youngsters to various events and meets and especially in trusting TelEm Group and its various stakeholders with the charge of their children.
“You have all done a great job and we are very proud of what you have achieve,” Angel told the young talents.
She said she would be taking up Mrs. Etnel’s advice to really push the promotion of the music video which is purposely being released after Carnival to achieve the strongest impact on the music community.
Promotion will also include viewing on the regional cable channel Tempo, airplay on all radio stations and postings on Youtube.

She reminded the 2015 TelCell Breakthrough group that the launching of their music video is actually the end of their term in the limelight, as arrangements are now fully in place to find to the winners of TelCell Breathhrough 2016 in October this year.
She said it will be the final time the 2015 group will perform together as TelCell Breakthrough winners when they open up this year’s contest in front of another sell-out audience.