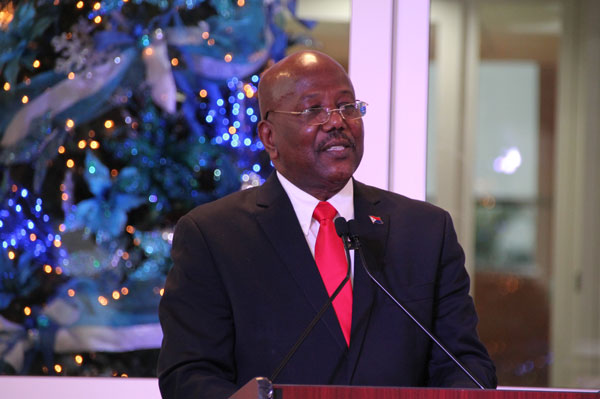 That song has been ringing in my head for quite some time now. You might ask, why?
Let me turn the question around and ask: Why not?
Just look across our region and tell me, what have you seen the past months?

Over 1,000 dead as Hurricane Matthew tore into Haiti! One thousand human souls lost in one catastrophic storm.
We may not be able to comprehend what that means, however, there, but for the grace of God goes St. Maarten.

Matthew may have spared the Dominican Republic but the torrential rains didn’t. The rains ravaged the northern part of that country recently, resulting in over 2,000 homes destroyed and thousands of people evacuated by force as the government there declared a state of emergency.

There again, but for the grace of God goes St. Maarten.

Even in Aruba and Curacao where natural disasters of this magnitude have been very rare, the rains have also wreaked havoc there just a few days ago.
We’ve had rains here too, but not with similar devastating effect.

Take a quick look around the world and tell me what have you seen? A major earthquake in Japan with threats of tsunami and the list goes on.

Eighteen years ago, when the faith community on the island came together with government to establish St. Maarten’s own Day of Thanksgiving, it was mainly in response to a series of devastating hurricanes that pounded the island for four consecutive years, starting with Hurricane Luis in 1995.

It was common at the time for many on the island to say we had deviated from the ways of the Lord and that was why we were being punished.
But no matter what mess we were in, God came through for us and showed us that there was a message in that mess.

And that message was that the storms were not sent to break us, but to make us realize that the gift of life is priceless.

Eighteen years may not seem such a long time for some people. But it is the age of maturity.
A child born 18 years ago, would today be able to vote. I know some of you might say, there he goes trying to play politics. Let me put your fears to rest.

It is one of the prayers I would like to offer as our celebration comes of age on this Thanksgiving Day; a prayer for stability in government so that we won’t have snap elections again, and that elections are held in 2020.
Our people deserve that as a thankful people.

Someone once wrote and I quote,
“Thankfulness is the beginning of gratitude.
Gratitude is the completion of thankfulness.
Thankfulness may consist merely of words. Gratitude is shown in acts.”

In this regard, I believe we have a great lesson to learn from the Holy Book, which in the parable of the 10 lepers teaches us about gratitude.

Jesus had healed 10 lepers who called out to Him from afar to cleanse them. But only one of the ten returned to thank Him and that one was a Samaritan, a foreigner.

I am not going to give a sermon on this; I’ll leave that to the inspired wisdom of our clergy. But I want to highlight the following points.

It struck me that Jesus did not make the nine lepers who did not return to say thanks unwell again for their lack of gratitude.
He did not punish them for their ingratitude. Oh, no!
All of them remained cleansed.

But He blessed the Samaritan. He said to him in Luke, Chapter 17, verse 19, “Arise, go your way. Your faith has made you well.”

Being grateful is therefore an act of faith.
It is a deliberate act; a choice we make. It also means being cleansed – doesn’t necessarily mean being well.

If the cleansing of the lepers was a miracle which made they who were once outcasts acceptable to society again, the state of wellness was a special blessing he bestowed upon the Samaritan.

The other nine lepers were cleansed of their leprosy, in other words their bodies were made clean but they remained ungrateful in their minds. The grateful Samaritan was made well because wellness affects body and soul.
It is much more than freedom from physical illness, it is, experts would tell you, an active process of change and growth. That was the blessing the grateful Samaritan received.

According to the American Catholic writer, Thomas Merton “… the grateful person knows that God is good, not by hearsay but by experience.

There are, if I’m not mistaken, 86,400 seconds in a day.
Don’t you think the least we can do is use one of those seconds that we enjoy as the gift of life to thank God?

For each second we are allowed to take a breath is a blessing from above.
And since we are reminded often to count our blessings, it means we receive 86,400 blessings a day. Shouldn’t we make those blessings count?

The Roman philosopher Cicero said: “Gratitude is not only the greatest of virtues, but the parent of all others.”

This mother of all virtues, therefore, must be at the heart of our daily existence.
I say this because I am convinced that the spirit of gratitude determines the digit of our altitude.

In other words, the more we give thanks with a grateful heart, the more abundance we will experience in our lives for, as the saying goes, it is not happy people that are thankful, it is thankful people who are happy.
And we should be happy that the Atlantic Hurricane season which officially ended at the end of November spared our island of the horrors of devastating storms like Matthew.

That is why we are gathered here today, because as someone noted, you can’t be grateful and be depressed at the same time.

Just a couple of days ago, some of us celebrated the U.S. Thanksgiving with a lot of merry-making.
A casual visitor to the island may have thought that St. Maarten was an overseas territory of the U.S.

While I see nothing wrong in joining other people in celebrating holidays important to them, this should, however, never be at the expense of our own.

Let me use this opportunity, therefore, to call on civil society and on cultural workers, churches and other NGOs to create activities that would make our Thanksgiving Day at least as meaningful to us as that of the U.S.

Finally, we are celebrating this 18th Thanksgiving service in front of our new Government Administration Building.

This is not because we do not respect the separation of church and state – we absolutely do.
This could be considered a way of invoking God’s blessings upon this new building and upon government itself since we haven’t had an official opening yet.

“As we express our gratitude, we must never forget that the highest appreciation is not to utter words, but to live by them.”

Permit me, therefore, to end as I began.