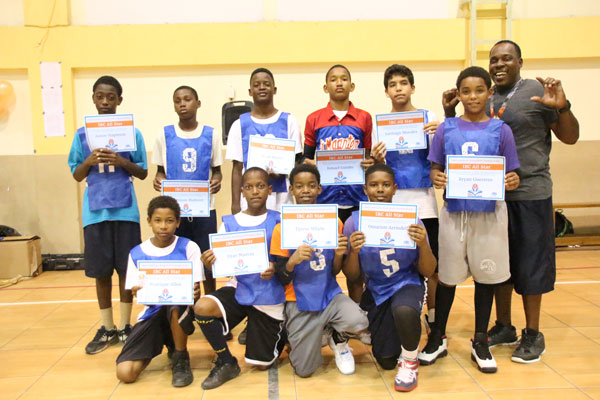 PHILIPSBURG:—-  The Interscholastic Basketball Championship official came to an end on Wednesday with an official award ceremony and all- star game for parents and fans at LB Scott Sports Auditorium.

The award ceremony, MC’ed by Walichi Basketball Association Vice-President Mr. Dennisio Duzong started with the national anthem being sang by Ms. Michelle Nicholas, winner of the 1st International Interscholastic Idol Primary School Competition in St. Maaerten. Following the anthem, each school team’s top academic player was rewarded with a ribbon to continue to emphasize the importance of education alongside sports. The sub champs, St. Joseph Primary school and champions Ruby Labega Primary school were then presented with medals and a trophy for their huge winning effort. The twenty 2016 IBC All-Stars were presented to the crowd and given a personalized award certificate for their all-star selection.

The game then started and Omarion Arrindell (MLK) got Pool B all-stars on the board first with the first 4 points of the game and Pool B never looked back. They led 11-4 after the first quarter and 16-8 at the half. Pool B All Stars were coached by Mr. Robert Pantophlet (Ruby Labega) and Mr. David Forsythe (MLK)

During the halftime, all coaches and key persons of the 10 teams were given a certificate of appreciation for their hard work with the youth of St. Maarten.
Pool A All-stars, coached by Mr. Jamal Newton (MAC) and Leary Hall (SDP) fought back in the third quarter and cut the deficit to 4 points, 14-18 to end the third. In the 4th quarter Pool B All-stars kept their composure and made key baskets to keep Pool A all-stars at bay and ultimately win the game 26-22. Pool B all-stars were led by Omarion Arrindell (MLK) with 9 points and Pool A All-stars were led by Chamiqueko Landefort with 6 points and Kayvaughn Schmidt with 5 points.