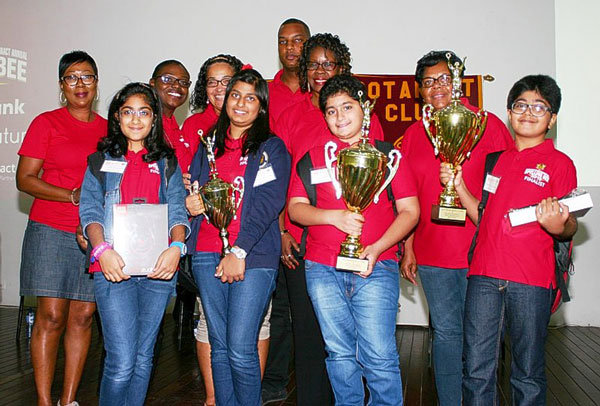 PHILIPSBURG:— The summer is over and while the students are settling back into the new school year, The Rotary Club of St. Maarten-Mid Isle is going full swing organizing ‘The Scotiabank Rotary-Rotaract Spelling Bee Competition 2016’, set to start on Sunday, October 16th. The 10 winners from that will head to the Semi-Finals which are being held on Sunday, October 23rd and the five winners from the Semi-Finals will head to the Finals on Sunday, October 30th, 2016. All three events are being held at the Belair Community Center, and food and drinks will be available during the breaks for the children.
As in previous years, participating schools will benefit from the proceeds of the Spelling Bee by being able to submit a ‘Wish List’ for items that are needed by the schools. All participating schools will receive items from their Wish List, which in past years have included fridges and stoves to assist with their breakfast programs, projectors, screens, playgrounds, computers and more. Individual winning students and their schools receive additional prizes.
This year there will also be an opportunity for the students to be tutored by volunteers for extra coaching in learning the words for the Spelling Bee Competition.
Scotiabank is the main sponsor for the event, organized by The Rotary Club of St. Maarten-Mid Isle and the Rotaract Club of St. Maarten Sunrise. Both clubs encourage the general public to come and support the students and their schools. There will also be a prize for the school with the best supporters.
Last year the five students who went forward to the final round were Saheli Kirpalani and Akarsh Bhatia from St. Joseph’s Primary School, Bhavesh Lakhwani and Diya Agnani from St. Dominic’s Primary School and Frankajha Fleming from The Valley Primary School of Anguilla. It was a nail-biting finish, as all students came prepared for the final round, and there was a tie for first place with three students. At the end of this round, Saheli Kirpalani, Alarsj Bhatia and Bhavesh Lakhwani had all tied for first place with perfect scores, and they also had perfect scores in the semi-finals.
The judges picked out 15 words from the pot they thought would be the hardest and the three students went into an elimination round whereby they had five words each to spell, for the first time ever in five years of the Spelling Bee competition, there was still no outright winner.
The decision was taken to find nine words (three words each) on the Internet to see if the tie could be broken. Finally, Akarsh Bhatia emerged as winner (St. Joseph’s Primary), with Saheli Kirpalani (St. Joseph’s Primary) and Bhavesh Lakhwani (St. Dominic’s Primary) tied for second place. Diya Agnani (St. Dominic’s Primary) finished at rank four. A trophy was given for the best supporting group which was the St. Joseph School.