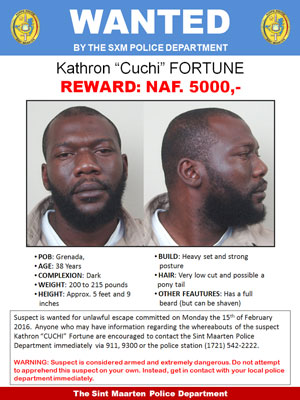 PHILIPSBURG:— The Justice Department on both the Dutch Side and French Side of Sint Maarten are presently continuing the intense search for the prisoner Kathron Fortune a.k.a. “CUCHI” (38 years of age) who escaped on Monday February 15th 2016 during a scheduled visit to the doctor’s office of Dr. Paul de Windt located on Welgelegen road in Cay Hill.
“CUCHI” is presently serving a 21 year prison sentence for murder he committed on the Dutch side of the island. During his escape shots were fired and it is still being investigated whether the prisoner got access to a firearm. The prisoner managed to avoid his capture even though an intense search was done by the police department and prison guards in the Cay Hill area, where he was last seen. We assume he had help from external sources to facilitate his escape.
Immediately after the escape of “CUCHI” a joint press release by the Public Prosecutors Office and Police Department was released, to inform the general public of the incident and requesting the publics’ assistance to be on the look-out for this fugitive and not to attempt to capture him, because he has been classified as “Armed and extremely dangerous”.
A full description of “CUCHI” and the latest photograph on file was also added to the press release along with phone numbers to call if anyone had any information which could lead to the recapture of the fugitive. The unlawful escape of this prisoner has raised serious concern for safety and created much unrest within the community.
The immediate posting of his escape on the Facebook page of the Police Force Sint Maarten got a lot views and shares. We would like to thank the community for their input and support nevertheless the information that we received is still insufficient to accurately track his location.
The Police Force had been working together with the French Gendarmes conducting general controls on different locations. House searches in the French Quarter area by Gendarmes were done to locate “CUCHI” who is also being sought by the French authorities, for the murder with torture of Angelique Chauvire in 2006. These searches also did not lead to the arrest or recapture of the prisoner. “CUCHI” has possibly changed his appearance and might be using several disguises and mode of transportations to get from one location to another.
Authorities on both sides of the island strongly believe that “CUCHI” is being assisted by an unknown person or persons in the community. The Public Prosecutors Office and Police Department are taking this opportunity to remind the entire community that housing an escaped prisoner and assisting in the prevention of his/her recapture is a serious criminal offence and that person or person will be prosecuted to the fullest extent of the law.
The Public Prosecutors Office and Police department continue to request assistance from the community by being vigilant and be on the look out for this fugitive. The Justice Department will not stop with this search. Nevertheless they cannot do it alone and needs the assistance from the community to locate this fugitive, recapture him and to safely return him to prison where he belongs. Once this fugitive has been returned to prison a heighten sense of tranquility will return and felt among the citizens in the community.
The search for “CUCHI” has intensified and will continue. The Public Prosecutors Office has posted the reward of NAFLS 5000,- available to anyone for information that leads to the recapture of this fugitive of the law.
Anyone who have information that can lead to the recapture of this fugitive should immediately get in contact with the Police Department by calling 54-22222 ext. 214 or215, the anonymous tip line # 9300 or 911. All calls will remain totally confidential.

Joint Press Release from the Public Prosecutor’s Office and KPSM.