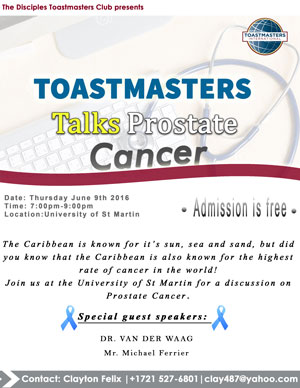 PHILIPSBURG:— “When I was asked by my club’s President, DTM Amanda Bedminster to chair this event, a little voice in me said, “Why me?” Another little voice immediately said, “Why not you?”
The voice that asked why me, knew of the hurt I have felt as it relates to prostate cancer. The other little voice that asked why not you, knew I was perfectly placed to talk about prostate cancer because I had firsthand experience on this killer disease.
You see ladies and gentlemen, my father died of this disease and you cannot imagine what watching him suffer, watching him die, did to me.
My father was everything to me. I looked up to him. He was my hero. He was, as I called him, the smallest, the biggest, the smartest little man that I knew. He was five feet, two inches tall, but in my village, everyone looked up to my dad.
Incidentally, years earlier, long before he died, whilst working at Mullet Bay, I met a man who reminded me so much of my father, in stature, in mannerism, and in intellect. He spoke with wisdom just like my dad and I definitely looked up to him. He, like my father, was diagnosed with prostate cancer, but who unlike my father, did not die, but survived this disease.

Ladies and gentlemen, I am talking about no other than Mr. Michael Ferrier.

We have a packed program for you, but before I end, I will give you this little bit of information to ponder.

In the Caribbean, we are known for our sun, sea, and sand. People come from all over the world to enjoy what they call paradise, but did you know that in the Caribbean we are also known as the place with the highest rate of prostate cancer in the world? The number one killer of black men in the world! Yes, that information surprised me too, and do you know which of the Caribbean island holds that distinction?
Can anyone tell me?
The Caribbean islands of Guadeloupe and Martinique! These two islands are very closely followed by Jamaica, Trinidad and Tobago, and the United States of America. These statistics were compiled by the Department of Urology, University Hospital of Pointre Pitre, Guadeloupe by Researchers Stephane Malick, Pascal Blanchet, and Luc Matinger. Also by the University of the West Indies, Mona Campus, Jamaica; and the University of the West Indies, Port of Spain Trinidad.
Between the years 1995 and 2003, Guadeloupe, with a population of 420 thousand people had 2531 cases of prostate cancer. In 2003 only, there were 427 new cases.
In Martinique, one in every four men dies of prostate cancer.
Between 1991 and 1995, there was an average of 800 new cases of cancer per year of which 42% of these new cases were prostate cancer.
Compared to the world statistics on prostate cancer, which is 168 cases per year per one hundred thousand people.
In Trinidad and Tobago 350 men are diagnosed with prostate cancer yearly.
According to a study conducted by the Pan American Health organization (PAHO) in 2002, there were approximately 18,880 public hospital discharge diagnose of male patients with cancer in Jamaica. Prostate cancer was the second most commonly diagnosed.
Another Earlier PAHO report stated that in 1991 there were 2407 cases of cancer deaths in Jamaica and that amongst males 30% of these deaths were prostate cancer deaths.
Researchers, also noted that the reasons for this high rate of prostate cancer stemmed from the foods eaten and the insecticide in the soils in which these foods were grown and insecticides in the water.
Most of these studies gave clear and irrefutable evidence that Black men over the age of 50 in the Caribbean and the US have a higher rate of prostate cancer than their white counterparts over 50 in Europe, the US, and Canada.
As a consequence, the Caribbean has the highest age standardized PCa specific mortality rates in the world.
The question now is, “Why is this so and what can be done to reduce this morbidity and mortality associated with PCa in the Caribbean?”
For more specifics and expertise on this subject, I now turn you over to our moderator”