Female passenger released — two of the suspects are minors.

PHILIPSBURG:— Police arrested three male suspects in the Simpson Bay area Wednesday night confirmed Police Spokesman Ricardo Henson. SMN News contacted the police spokesman for confirmation after the Gendarmes issued a press release on the arrest of the suspects they believed committed at least two robberies on the French side on Tuesday and Wednesday. Henson said four persons, three males and one female were in a vehicle at the time of the arrests and they are suspected of committing armed robberies both on the French and Dutch sides of the island. The police spokesman said that the suspects were taken to the Philipsburg Police Station where they were interrogated and later police released the female passenger since there is no evidence at the time that showed she was involved in the armed robberies. Henson further explained that the vehicle has been confiscated for as the investigation continues. He said he does not have any details as to who the suspects are neither their ages but promised to release more information on Friday.
SMN News tried to reach Chief Prosecutor Ton Maan on Thursday for comments regarding the international cooperation that led to the arrests of the suspected culprits but the country’s Chief Prosecutor could not be reached while the press prosecutor Karola van Nie was unavailable on Thursday afternoon.

On Wednesday at approximately 07.20 P.M. four persons were arrested by police in the Simpson bay area suspected of being involved in several armed robberies which recently occurred on the French and the Dutch side of the island. The arrests took place based on information that came in from the French gendarmes after a robbery on the French side on Wednesday evening. These suspects are three men and one woman. They were taken to the Philipsburg Police Station and put into custody for further investigation. The follow-up investigation done by detectives indicated that the suspects in question are most probably responsible for at least four recent armed on the Dutch side. The female suspect was released on Thursday January 14th. Two of the suspects are 17 years of age and one is 18 years old. There was also an outstanding arrest warrant for one of these suspects. All three suspects remain in custody for further investigation. The vehicle the suspects were driving at the time of the arrest has been confiscated for further investigation.

December 1, 2021
0
~ Says there are no demands at the State services from protestors.~ PHILIPSBURG:--- Prime Minister Silveria Jacobs said on Wednesday that she has been in...

November 30, 2021
0
PHILIPSBURG:--- Due to a recent situation where barricades were once again erected and set on fire early Monday morning thereby blocking the main road in the residential district of Sandy Ground on French Saint Martin, cruise lines who will...
Read more 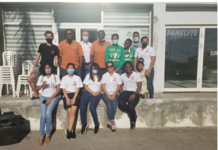