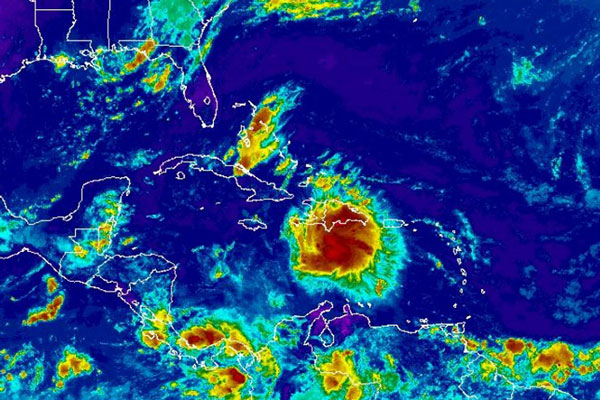 FLORIDA:—- United States, Monday, August 1, 2016 – It’s a tropical wave right now, but there’s a strong possibility that but by the end of the very first day of August, Invest 97-L could be Tropical Storm Earl.

Even if it develops into a storm a bit later, Jamaica, the Cayman Islands, Haiti and the Dominica Republic will feel the system’s effects today and into tonight.

After a storm-free July, the system is developing right on cue, in line with predictions that storm activity would ramp up this month.

The National Hurricane Centre (NHC) in Miami said the thunderstorm activity associated with the tropical wave, which is over the central Caribbean Sea about 350 miles east-southeast of Kingston, Jamaica, continues to show signs of organization. And satellite wind data indicates that the system is producing winds of 40 to 45 miles per hour.

“If this development trend continues, a tropical storm is likely to form later today or tonight as the system moves westward over the west-central Caribbean Sea at 20 to 25 miles per hour,” the NHC said this morning.
Regardless of development, locally heavy rainfall and gusty winds, perhaps to tropical storm force, are likely along the southern coast of the Dominican Republic and Haiti today.

Tropical storm conditions are likely to occur over Jamaica by this afternoon or evening, and could reach the Cayman Islands overnight.

“Interests in these areas and elsewhere in the western Caribbean Sea should continue to monitor the progress of this disturbance,” the NHC added.

As for Invest 96-L, that is no more. As forecasters predicted, that tropical wave which was off the Verde Islands did not develop, due to unfavourable upper-level winds.