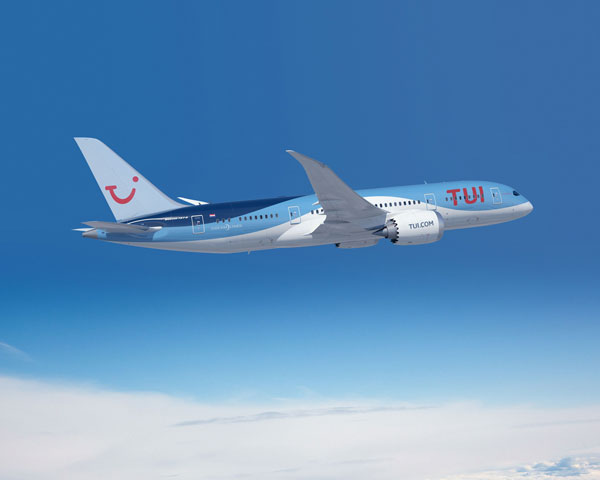 SIMPSON BAY:—- About 120 travel agents will disembark the Dreamliner 787 aircraft at SXM Airport on Friday, October 30, 2015 at 4:45PM, on a FAM trip organized by TUIfly to mark its inaugural flight to the island, which is supported by SXM Airport.
“We’re thrilled to have TUI begin service to our airport with the state-of-the-art Dreamliner 787 aircraft and thus offer additional seats to The Netherlands,” remarked Regina LaBega, SXM Airport managing director.
“This service will no doubt increase visitor arrivals from the European market, particularly the Dutch, and given the reputation of TUI, will guarantee quality and affordable package deals to vacationers,” LaBega added.
The inaugural TUI flight will be welcomed with the traditional water canon salute by SXM Airport’s Rescue and Fire-Fighting department, followed by a ceremony for invited guests that include government officials, and TUI executives arriving on the inaugural flight.
TUI will operate a twice-weekly scheduled flight to SXM every Wednesday and Sunday.
Earlier this year, SXM’s managing director, Regina LaBega, met with Arke Fly’s Area Manager for Aruba, Bonaire, Curacao, and St. Maarten, Lara Soetekouw and Sales Manager Marlow de la Fuente. Both parties expressed their commitment to the success of the new service, which officially begins November 1, 2015 under TUI. Prior to October 1, 2015, TUI operated as Arke Fly.