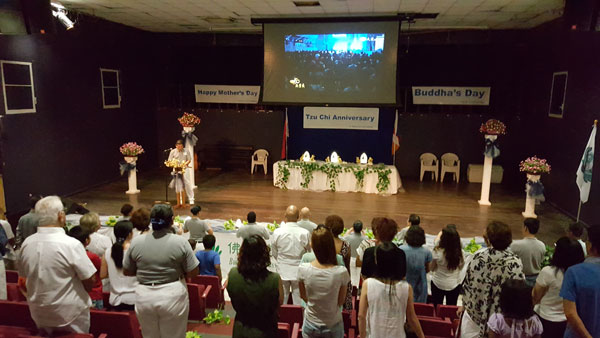 PHILIPSBURG:— The St. Maarten Tzu Chi Foundation honoured mothers, shared useful information on the power of using naturally made enzymes and gave an insight into the work the Foundation has done over the past year, while giving thanks, during a triple celebration held at the Philipsburg Cultural and Community Centre on Sunday, May 15.

A total of 29 of the Foundation’s volunteers participated in the annual event, which attracted close to 50 guests.

The event opened with video highlights of various aspects of Tzu Chi including the Tzu Chi Spirit, The Road in the name of Love and a special message from United States President Barack Obama on the occasion of the Tzu Chi anniversary. Tzu Chi also gave an insight into the many projects and initiatives it has done over the past year in St. Maarten as well as the work done internationally.

This part of the event was followed by the honouring of five Tzu Chi volunteers, who are mothers. The special ceremony called “Mother’s Day “Kneeling Lamb,” gave children a chance to express their compassion and gratitude to mothers by washing their feet.

The interaction and sharing of Tzu Chi Commissioner Sandra Cheung, who co-hosted the programme with volunteer Roger Yee-Fong, was enlightening and received continued enthusiastic responses from the audience that included representatives of American University of the Caribbean (AUC) School of Medicine, former First Lady Angela Richards-Huggins and Consul to the Dominican Republic in St. Maarten Myra Provence

Richards-Huggins and Provence shared their sentiments about the ceremony as well as their experiences with the foundation during the event. Their sharing had been inspiring and was warmly received by the audience.

Active volunteer Margaret Steeman delivered an enlightening and informative presentation about how easy it was to make and use Garbage Enzyme to ward off mosquitoes and for general home cleaning purposes. Members of the audience were presented with their own sample of the enzymes for their personal use.

Tzu Chi hopes more persons in the community make their own enzymes using everyday products that are disposed of.

Tzu Chi volunteers and guests also got a chance to give thanks during the ceremonial Buddha’s Day part of the event.

The ceremony ended with a sumptuous selection of vegetarian delicacies and drinks being shared with guests, many of whom shared positive sentiments about the event.

Mrs. Gumbs, one of the guests said the programme had been touching. She said during the public offering, she was moved to tears.

AUC official Dr. Golden Jackson said the programme had been uplifting and she was happy to have attended.

Another guest, Mrs. Fung, said she and her family members who attended the event, were grateful for being given an opportunity to attend and were so touched that the entire family signed up committing to help the non-profit foundation, execute its work in the community, by being monthly donors.

Steeman said the celebration gave volunteers and the public a deeper insight into Tzu Chi and its work around the world. She said St. Maarten is blessed that it has been spared devastating disasters that some countries unfortunately experience, but is lucky to have an organisation like Tzu Chi in its midst.

Tzu Chi Commissioner Sandra Cheung thanked all the volunteers for their efforts in making the event a success, all attendees for gracing the event with their presence and everyone else who in one way or another supported the event. “The most important thing to learn is the spirit of great love,” she said.