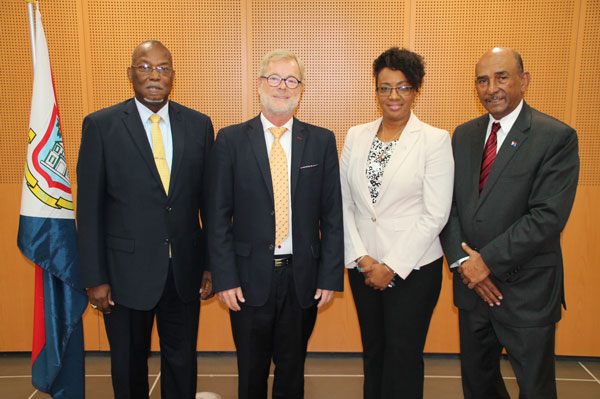 PHILIPSBURG:—  Children’s rights expert consultant Nils Kastberg and Mrs. Shermina Powell-Richardson, Sint Maarten’s representative in the Kingdom Taskforce for Children’s Rights and the Department Head of Youth Affairs, had a consultation session with a delegation of the Council of Ministers on Thursday, February 2. The delegation consisted of Deputy Prime Minister / Minister Justice, Mr. R. Boasman; Minister of Finance, Mr. R. Gibson Sr.; Minister of Education, Culture, Youth and Sports Affairs, Ms. S. Jacobs and Minister of Public Housing, Spatial Planning, Environment & Infrastructure, Mr. C. Emmanuel. Both Prime Minister / Minister of General Amade available through the United Nations Children’s Fund UNICEF the Netherlands and he has been assisting Sint Maarten since 2015. In preparation of the Kingdom Conference scheduled for March 2017, several meetings with stakeholders have been scheduled to formulate a ‘Comprehensive Educational Vision’. The conference is in continuation of the ‘Action Plan Children Rights’ by the Kingdom Taskforce and is attended by representatives of the four countries within the Kingdom and focuses on the area of the family as central and the upbringing of the child affairs, Mr. W. Marlin and Minister of Public Health, Social Development and Labour, Mr. E. Lee were off island at the time of the meeting. The ministers present were informed on the importance of improving children’s situations on the island, the need for collaboration and cooperation among ministries to address the matter comprehensively and the need for investment in the quality of care.
In her introductory words, Minister Jacobs stressed that issues related to the topic of the youth of Sint Maarten, not only directly affects her own Ministry, but also that of Public Health, Social Development and Labour, Justice, and Tourism, Economic Affairs, Transport and Telecommunication and ultimately influences the entire society. “For this reason, decisions on the vision to move forward including the financial consequences need to be made jointly.”
Mr. Kastberg stated that investing in Sint Maarten’s sovereignty is essential to build the wealth of the country. This means finding ways and means to increase the income base as well as “change the mindset to underpin the progress of the sovereignty” of Sint Maarten; two elements that go hand in hand. The Ministers present were provided with statistics and real life stories related to the youth of Sint Maarten illustrating the gravity of the situation. The ministers underscored that prevention and collaboration are key elements in the process. To display the will to move forward and to underline the urgency of the matter, a separate brainstorm session with the full Council of Ministers will be scheduled at the beginning of March 2017. The action plan of all those projects, programs and initiatives that require collaborative preparation and execution will form the basis of the discussion. This action plan is a chapter within the draft ‘Integrated Youth Policy’ which is currently being upgraded by the Department of Youth Affairs and should be readily available by the end of February.
Mr. Kastberg services as a children’s rights expert has been