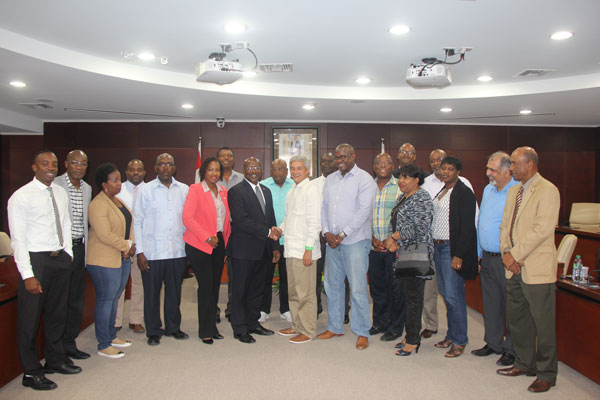 PHILIPSBURG:— The leader of the National Alliance William Marlin and their members along with the leader of the United Peoples Party Theodore Heyliger along with his members told members of the media on Thursday that they will do everything in their power to maintain a stable government that will last for the next four years.

Marlin said over the years both parties had seven seats in different elections but this time around the voters have decided to award the two parties the same amount of seats, 5 seats to each party. He said following the results the two political parties have analyzed the results and by 6am the Tuesday morning they signed an agreement in the Rice Hill are.

Marlin said just after the results were given out some persons went ahead of themselves and said that they already had an agreement as to the formation of the government. Further to that Marlin said rumors had it that one member of the National Alliance had declared himself independent which also not true. He assured that the NA MP who was present at the press conference did not object to anything neither is he going anywhere.
Marlin said even though announcements were made within the past days, the press conference called on Thursday was to formally announce to the people of St. Maarten that the National Alliance and the United Peoples Party have come together and signed an agreement to govern the country for the next four years.

The leader of the UPP Theodore Heyliger in his statements said that called the outcome a historic moment. Heyliger said he worked with Marlin and they worked well. He said this time around the keyword from the people was stability. Heyliger said the meeting held with the National Alliance on Tuesday morning was cordial especially regarding the future of the country and what needs to be done in the interest of the country and most importantly they need to put aside their differences and work in the best interest of St. Maarten is the common ground. Heyliger further stated that he will ensure that this coalition government work for the full four-year term since this is for the people of St. Maarten.

Asked by SMN News if he spoke to his members and if he could assure the people of St. Maarten that there will be stability within the government. Heyliger said over the past two days both political parties spoke with their members as for the UPP they met their board, supporters, and members and they gave them the full explanation as to what transpired and thus they have decided to hold a joint press conference.

Marlin said the National Alliance campaigned on the need for stability in the country since St. Maarten cannot continue on the same trend since the country obtained its status. He said St. Maarten simply cannot afford to change government every time because the people are sick and tired. Marlin said they cannot guarantee that people will not get disgruntled at times but there is absolutely no reason for him to doubt his members.

Marlin further stated that all the Ministers that will be appointed by the NA will come from their slate since they also campaigned on that also. He said they informed the people that what they see on the National Alliance slate is what they will get and for him, the formation of this coalition can be considered a broad-based government since they have 10 seats and such they could pass any legislation and provide a stable government for the next four years.

Also asked by SMN News how he intends to strengthen the justice chain and deal with the problems of the Pointe Blanche prison and reviving the economy since most of the cruise ships are heading to the BVI. Heyliger said that the first thing he has to do is appoint the Ministers and after that, he will work on how he will deal with the issues in the justice chain and also how to revive the economy of St. Maarten.

Marlin was asked what happened during the negotiations with the other two political parties, he said that the campaign is over and now is not the time to throw stones but instead it’s time to deal with the affairs of the country. He did say that signing an agreement was just as difficult as appointing a pope to the Vatican. He said they are always smoke and fires in different sizes but by Tuesday morning there was white smoke coming out of the Rice Hill area where the agreement was signed between the UP and NA, he said that is what matters right now, for him all that transpired in the past is irrelevant.

Marlin said during the election campaign lots was said about each other and he insisted that the campaign is over and right now the main thing now is to govern the country and how they will they move the country forward. He said there is no blueprint on how they will fix the various areas is not yet in place.

Click here to view more photos from the press conference held on Thursday.

Source: St. Martin News Network
UP/NA Coalition Government plans to bring about stability in the country — Candidates that ran on the slates will be appointed Ministers.