Home Local News USP in the process of selecting another candidate to take up TEATT... 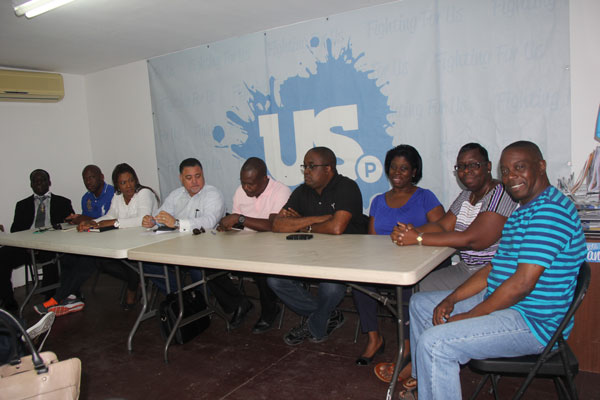 Party Leader says he has no issues with the current coalition and that they are not going anywhere.

PHILIPSBURG:— Leader of the United Peoples Party (USP) Frans Richardson and members of the board expressed their sentiments on the screening process now that it has become public knowledge that their candidate for the Ministry of TEATT failed the screening process. SMN News announced the outcome of the three-month long screening process which prompted a press conference on Sunday. Richardson said the screening process is something the parliament of St. Maarten has to look at since it goes very deep into the candidate’s life and those they affiliate with. He said even if the candidate’s such as Cecil Nicolas has no criminal record, but those that is registered as living at his residence affects him. Richardson and Nicolas said the screening process is very grueling, and even if the report from VDSM has incorrect information the candidate is not given the opportunity to challenge that report. In the case of Cecil Nicolas, he was asked to give everything he has such as businesses and even his taxi license during the screening process and now that he has failed he has nothing to sustain him. Richardson said during the past three months Nicolas did not earn a salary and now that he failed the screening he has to see if he would be able to get back his taxi license so he could move on with his life.
The leader of the USP said that this is the second candidate he nominated that failed and neither of them has any criminal records. He said in the case of Glen Daniel, he failed because of civil matter that he has with his siblings while Nicolas failed because of someone who is registered as living at his address. Another concern the USP leader raised was the opportunity given to the candidates to regulate their taxes if they have any and when they do regulate those tax issues it’s being used against them. Ricardson said the way he sees it based on the screening procedure no one on St. Maarten would be able to serve their country because the candidates are being judged by whom they affiliate with even for business purposes. He also stated that USP will do due deligence this time around and ask the next candidate to look in their closets and even the closets behind them to make sure there is nothing there that would cause them to fail the screening.
Richardson also informed the media that Cecil Nicolas had to resign from the board of USP and the new president-elect is Agnes Brooks the number 8th candidate that ran on the USP slate while Michael Granger has been elected Michael Granger as secretary.
Richardson said his party did not select the person they will nominate for screening as yet even though he was informed of the screening results for Nicolas on Wednesday, while Nicolas was informed on Tuesday. He said the board of the USP has been busy interviewing candidates for the position while he personally nominated two persons and asked the board to interview them and make a selection. Richardson also stated that the board interviewed at least five persons and they will select one of those persons and the Prime Minister will be informed by Sunday night or early Monday morning.
While the USP leader lay the blame on the screening procedure which they say cannot be challenged, Richardson went on to say that the Governor and Prime Minister are the ones that have the last word and if the two don’t like the candidate then they will go along with the report even though it has incorrect information and not appoint the candidate.

USP have no issues with current coalition or Finance Minister.
Another issue the USP leader clarified on Sunday was the rumor that has been going around saying that the current coalition has some serious internal issues. Richardson said he wants everyone to know that he has no problem with the current coalition neither does he have any problems with the Minister of Finance. He said that he did not form a government to break it up and such he wants everyone to know that the USP is backing the current coalition all the way.
USP candidates dissatisfied —saying party leader did not consult with them prior to appointing Ministers.
Several candidates that postulated on the USP slate for the September 26 parliamentary elections are not at all happy with the way the board and leader of the party chose to nominate and appoint Ministers. Those that spoke to SMN News on the condition of anonymity said that the party leader and the board never consulted with them prior to appointing the Minister of Justice who did not run for the USP slate and the former President of the USP Cecil Nicolas. The USP candidates said even now that Nicolas failed the screening Richardson did not consult with them or inform them on who would be appointed. “We want the USP board and leader to know that the party got three seats because of all the candidates that placed their names on the slate and went out there to gather votes. The board of the USP did not run for any position but today all members of the board got positions while those that ran on the slate are left in the cold, and not even being informed.” SMN News reporter asked Richardson to address the matter, in response he said that the 22 candidates that ran on the USP slate ran in order to get elected to Parliament, none of them ran to become Ministers and this is something they are aware of. Richardson said that he has even lost trust in the candidates he nominated because he is of the opinion that the personal discussion he held with them were leaked to the media and other persons. This alone causes me to lose trust in those persons because what was discussed internally should have remained internal.

Source: St. Martin News Network
USP in the process of selecting another candidate to take up TEATT Ministry, totally disagrees with screening process.

January 27, 2022
0
PHILIPSBURG(DCOMM):--- The Collective Prevention Service (CPS) a department within the Ministry of Public Health, Social Development and Labour (Ministry VSA), has registered one case of legionnaires. Legionnaire’s disease is a serious type of pneumonia (lung infection) caused by legionella...
Read more