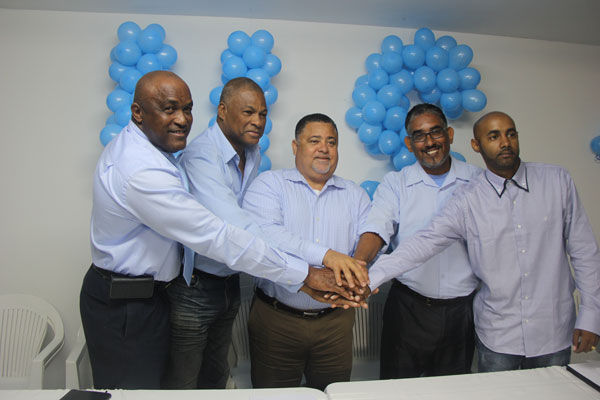 PHILIPSBURG: — The United Peoples Party presented another four candidates on Thursday that will be contesting the September 26th 2016 elections. Those that were presented are Benjamin Kelly, Martin Wilson, Shenelle Brownville, and Raphael Benjamin.
At the launching on Thursday President of the USP introduced the four candidates, two of which ran on the United Peoples Party slate in 2010, they are Kelly Benjamin and Shenelle Brownville.
Benjamin said he has a lot to offer and to help move St. Maarten forward since he has been working in the Parliament of St. Maarten for the past 6 years and saw what is taking place among political parties. He also said that the only
Shennell Browville said in response to a question from SMN News that he chose to run on the USP this time around because when he ran on the UPP in 2014 he did not get the full support of his family.
Raphael Benjamin aka Juny a new comer to the political arena said that he has worked for government for years, and currently he is a casino controller, he said one one of his burning issues is the six months contracts that workers on St. Maarten are forced into. He said while there are several workers in the casino industry ‘dealers’ that are doing a good job he is the one that has to approach the workers at the end of their contract and give them the bad news that their contracts ended. Benjamin said this is something he plans to work on if elected because sending home workers each time their contracts end also hurts him.
Martin Wilson, also a long time government worker said he has been working in the Ministry of Economic Affairs and everyday he is faced with issues affecting the people of St. Maarten. Wilson said he and the leader of the USA grew up together and while he wants to defend the people of St. Maarten and work on the day to day issues that are affecting them he chose USP because for him its being part of a family.
MP Frans Richardson expounded on the short term contract which he said the National Alliance and himself worked on and presented to parliament some years ago. He said a current MP who is was a Minister changed the entire legislation and now this government is working with stakeholders to do over the legislation, he made clear that if the legislation is not finished before September 26th it will be worked on when they get back into office.
As for ship jumping, Richardson said everyone that left the UPP gave their reasons all of which boils down to lack of leadership. He said his party is united and each candidate and the board members are fully aware of everything the USP does. Besides that he made clear that those persons that left the red, white and blue coalition in 2014 had no reason to do so other than their own personal interest.