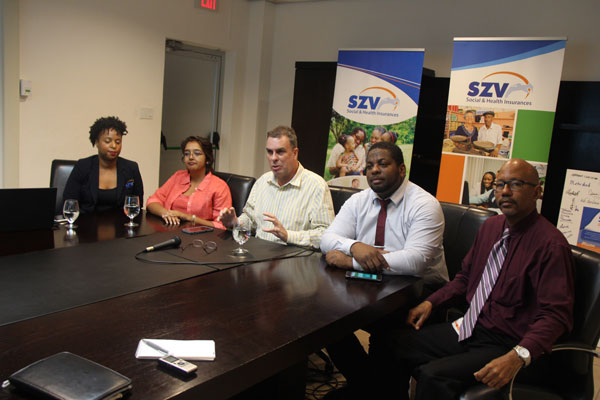 Admitted that they have made several mistakes and are busy cleaning up to enhance their services.

PHILIPSBURG: — Management of USZV have started a nationwide campaign in an effort to inform the general public of all their rights and obligation while being insured at USZV. The staff of USZV has embarked on a mass media campaign, they are also going door to door and are prepared to meet with every stakeholder including the SHTA, to inform them that workers on St. Maarten must be insured regardless of their legal status, besides that every insured person must know what they are entitled to and as such USZV is committed to taking all action to fully inform the population.
Managing Director of USZV Glen Carty admitted that the health insurance company does have lots of problems that needs fixing, which he said will take a few years before they are up to par. Carty said St. Maarten (USZV) inherited a lot of their problems from the former SZV which was part of the Netherlands Antilles. He also made clear that policies are extremely old going back to as long as 70 years.
Parveen Boertje outlined the problems they have internally and the plans they have in place to fix the problems they have been encountering. In so doing USZV started a training program for their staffers which began in January and should conclude by February. She said through these training the staff of USZV will be more equipped to deal with their clients and even make their waiting time shorter. USZV also implemented an open door policy on Wednesday’s where anyone can walk into their offices for information. Since the implementation of the open door policy Boertje said that they have seen a lot of progress.
She said that all workers have accident insurance which covers them from the time they leave their home to go to work and back.
Insurers traveling overseas not insured advised purchasing traveling insurance.
One of the main message USZV have for their clients is that they should know that insurers are not covered while off island. Carty said only about a year ago management of USZV discovered this even though the longtime workers had it in their head but not on paper.. He further explained that USZV insurers are advised to purchase travel insurance whenever they intend to travel overseas. Asked if and when this policy will change Carty said this will take time because they have to work on creating a new policy which has to also pass through all the organs of government. He stressed that persons working on St. Maarten and are insured through USZV must take note that they are not covered even if they travel to neighboring islands such as Curacao, and the BES islands.

USZV not interested in workers legal status… Efforts being made to have all workers insured.
Carty also stated that he wants all workers on St. Maarten to know that USZV is not interested in their legal status, because they are not immigration officers. He said that workers working on the island have been running when they see USZV inspectors, instead of working with the inspectors to get them insured through their employers. Carty said further stated that as long as a person is working five days per week they are entitled to medical insurance. He said USZV staff has encountered persons who approached them and even told them that they cannot contact their employers because the employers holds their passports. He stressed that as long as USZV has information on persons working and does not have insurance they will take it upon themselves to approach the employer in order for him to take up his full responsibility towards the workers.
The management of USZV made clear that they are not there to close down businesses but they have to ensure that everyone complies and pay their share if St. Maarten is to get a new hospital that can provide quality healthcare.
Carty and Elton Felisie said that they estimated their outstanding debts to be in the range of NAF200M. He made clear that the figure is not a sure figure it could be a bit lower or higher. These monies he said USZV through ATS has been collecting. Carty explained that in the past SZV would send a bailiff to the companies with their outstanding debts and as soon as those companies see the figures they would close their doors and move away. However, the management of USZV has changed that by allowing the businesses to pay up their current bills and make an agreement on how they will pay off their arrears. Carty they are not in the business of closing down businesses but they are working with the businesses and if they do not comply after a certain timeframe then USZV will have to use their legal jargons to get what is owed to them.
Besides all of that Carty said with the purchase of the Government Building USZV was able to clear up the debt government had. He said on Friday USZV and government will be signing their rental agreement for the building which would allow them to collect monies on the investment made.
As for the media, the management of USZV has decided to create more space for the media to obtain information, one being a media center on their website, where all press releases and other media-related items could be found, this would be in the form of press releases, audio files or video.
Asked what the insurance company intends to do with those workers that have been abusing the system by being on sick leave for years. Only Wednesday the Minister of Justice reported that a number of prison guards are on sick leave for months if not years, while there are other departments that have been haunted with workers who works half days for two to three years with USZV approval. Carty said that these workers claim they have stress or back pain and in most cases, their general practitioner would place them on sick leave. Asked if the doctors of USZV does not do their jobs by verifying if the workers are indeed sick or if some of these civil servants have special relationships with the USZV doctors that has been approving these lengthy sick leave. Carty agreed that the doctors at USZV have not been examining the patients that get long leave for stress and back pain but that too would change since USZV is doing everything possible to clean up the entire system. Carty made clear that while they have a plan of action the changes will improve slowly since it is a process that will take time. He said that he is hopeful that by 20/20 USZV will be where it wants to be and would be able to provide the services they need to. Asked about the medical referrals patients that go abroad Carty said USZV has a lot of challenges with this process because they have to work as travel agency, and even babysitters since the patients would misuse their funds and then approach USZV for more monies. He did indicate that USZV is busy signing contracts with COMEVA and their representatives in the Dominican Republic in order to structure the services that are given to patients while overseas.