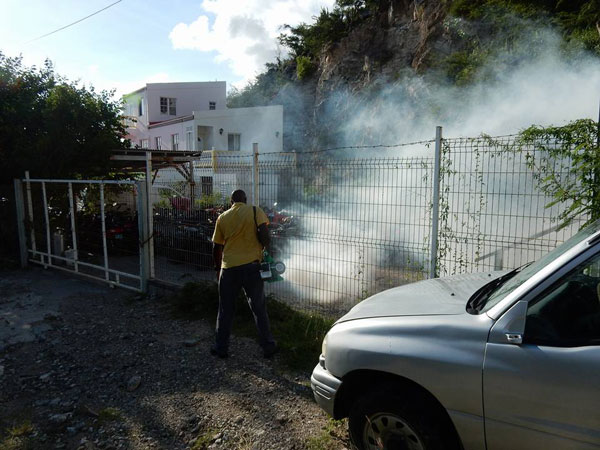 GREAT BAY (DCOMM):—- The National Mosquito Elimination Community Program Zika Virus disease (ZikV) “Beat ZikV,” was recently in the residential area of Mary’s Fancy, and of the homes visited, one in three homes had mosquito larvae.

The vector control team and volunteers received good cooperation from the residents of Mary’s Fancy. In total 90 +/- premises were visited of which 55 were homes. Yard inspections were carried out. 27 of the yards were confirmed positive as a breeding source for mosquitos.

A home owner’s survey was also carried out together with the yard inspection in order to determine people’s attitudes towards and knowledge of mosquitos and elimination measures.

The survey revealed that residents were aware that backyard breeding sites were contributing to the local mosquito problem.

The success of the community program calls for close cooperation of residents within the identified district (s) to ensure a smooth operation of house to house visits and their availability to create an opportunity to provide one on one education on the elimination of mosquito breeding sites in and around the house.

In addition to the opportunity to increase awareness on one on one, there is simultaneously a yard inspection by the vector assistant controllers to detect if there are breeding sources in the particular yard and its respective surroundings. Based on the detected mosquito breeding sites in the yard and its respective surroundings mosquito traps will be placed, monitored and collected within a short period; set-up and monitoring of traps to study mosquito behavior and larvae development, and if needed targeted fogging of identified locations.

The ultimate purpose is to minimize the occurrence of mosquito borne diseases by eliminating mosquito breeding sites within the districts with a special focus on the elimination of the Aedes Aegypty mosquito.

CPS reiterates to the population of Sint Maarten as well as visitors to wear light colored clothing at dusk; long sleeve shirts and pants; and use mosquito repellent to prevent being bitten by a mosquito that could possibly be carrying a mosquito borne disease.