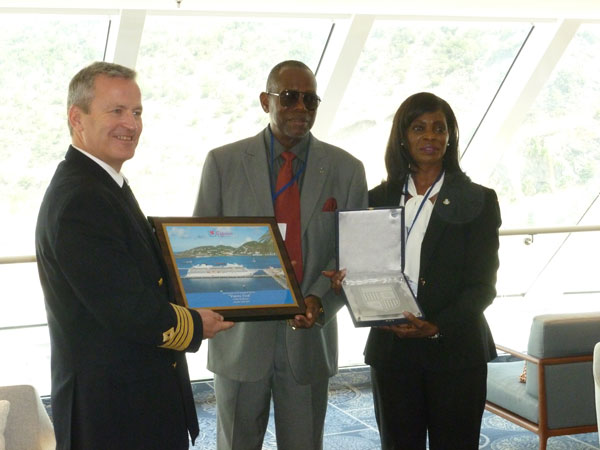 POINTE BLANCHE:—  Port St. Maarten and the destination opened the 2016-2017 cruise season with the inaugural call of the Viking Star, one of Viking Ocean Cruises vessels.

On hand for the occasion was outgoing Minister of Tourism & Economic Affairs Ingrid Arrindell and incoming Minister Theo Heyliger as well as representatives from Port St. Maarten, Maduro & Sons, the St. Maarten Tourist Office and some other stakeholders.

During the plaque exchange, Captain Rune Lokling stated that he was very pleased to call at Port St. Maarten and thanked the port for a warm welcome on behalf of the crew, passengers, and Viking Ocean Cruises. Lokling added that Port St. Maarten is the most prominent of ports above all others coming in as #1 due to what the destination has to offer is terms of history, shopping. and beaches which are the top areas for cruise passengers.

Minister Ingrid Arrindell welcomed Captain Lokling to the destination on behalf of the Council of Ministers, and the people of Sint Maarten. Minister Arrindell added, “We are very excited to share this special moment with you on your inaugural voyage to our beautiful island. Just like the original word Viking, you sailed into our Great Bay, as a true Viking, now in the 21st century, this time around confident in your pursuit of happiness for your passengers.”

Hector Peters, Acting Human Resources Manager, on behalf of Port St. Maarten management, welcomed the Captain, his crew and passengers to the destination, and wished them a wonderful stay. Plaques were then exchanged as is customary.
The dignitaries and stakeholders were escorted to the ship with the Mighty Dow Steel Pan crew in the lead. Cruise passengers were delighted to the local steel pan music display.
The welcoming of the Viking Star on its inaugural visit signaling the opening of the 2016-2017 cruise season was also one of Minister Arrindell’s last official activities.

“Our harbor where your journey begins and ends is arguably one of the best in the Caribbean. Kudos to our team for being proactive and persistent in its pursuit of providing safety, quality and a diverse product to our customers.

“It is my sincerest desire that the cooperation between the stakeholders which is the cruise industry, St. Maarten Economic Cruise Association, Government and the Harbour Group of Companies, continues in a true partnership offering only the best in quality for our clients, on and offshore.

“I take this opportunity to say thank you to everyone with whom I have had the opportunity and pleasure to work with during this past year. As I leave office and look back at our achievements during this period, humbled and proud at the same time of having the chance to welcome with Port St. Maarten some of the most exciting commercial vessels to Sint Maarten. Again, congratulations to the Captain and crew of Viking Star. Wishing you much success and Bon Voyage,” Minister of Tourism & Economic Affairs Ingrid Arrindell concluded.

Viking Cruises offers both river cruises and ocean cruises through two product lines, Viking River Cruises and Viking Ocean Cruises. The global corporation headquartered in the United States with main operational headquarters in Basel, Switzerland, was established in 1997 by a Scandinavian and Dutch consortium led by Torstein Hagen.

In May 2013, the company announced the launch of a new small-ship ocean cruising division, Viking Ocean Cruises, which began with the maiden season of Viking Star in spring of 2015, and features Baltic and Mediterranean itineraries. In 2016 and 2017, Viking Star will be joined by two equally elegant sister ships, Viking Sea and Viking Sky.

The Viking Star carries 930 guests. Classified by Cruise Critic as a “small ship,” Viking Star features understated elegance and modern Scandinavian design. In its debut season, Viking Star was awarded the cruise industry’s highest honors, including being named Best New Ocean Ship and scoring a 5-star rating by the editors of Cruise Critic, as well as receiving the highest rating in the mid-size ship category in Berlitz Cruising & Cruise Ships 2016.

The Viking Star made its first transatlantic crossing and arrived in New York en route to the Caribbean to start its winter sailings as part of its 11-day West Indies Explorer itinerary. On October 11 the vessel officially commemorated its first United States port of call in Boston.
Viking Cruises is a small growing cruise line which places emphasis on new ways to bring the line’s unique destination-focused approach to more regions of the world.

The line’s Caribbean itineraries are inspired by iconic 18th-century navigation routes and were developed to highlight the rich history and culture of the region that includes destination Sint Maarten.

Viking Star will homeport out of San Juan, Puerto Rico. The vessel will return to Europe in February 2017.