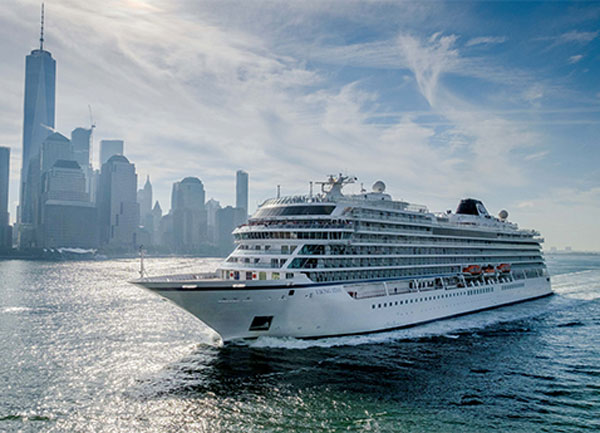 POINTE BLANCHE:— Port St. Maarten and the destination will be welcoming for the first time the cruise vessel Viking Star, one of Viking Ocean Cruises vessels.
Viking Cruises offers both river cruises and ocean cruises through two product lines, Viking River Cruises and Viking Ocean Cruises. The global corporation headquartered in the United States with main operational headquarters in Basel, Switzerland, was established in 1997 by a Scandinavian and Dutch consortium led by Torstein Hagen.
Initially, the company purchased four Russian ships and provided a Russian river cruise product to Europeans. The following year the company purchased additional ships and continued to cater to the European market. In 2000, the company expanded into the American market, establishing U.S. headquarters as Viking River Cruises in Los Angeles, California.
Through rapid expansion, the purchase of KD River Cruise lines, and unprecedented new builds, the river cruise division grew to be the world’s largest river cruise line, and currently offers cruises along the rivers of Europe, Russia, China, Southeast Asia and Egypt.
In May 2013, the company announced the launch of a new small-ship ocean cruising division, Viking Ocean Cruises, which began with the maiden season of Viking Star in spring of 2015, and features Baltic and Mediterranean itineraries. In 2016 and 2017, Viking Star will be joined by two equally elegant sister ships, Viking Sea and Viking Sky.
The Viking Star carries 930 guests. Classified by Cruise Critic as a “small ship,” Viking Star features understated elegance and modern Scandinavian design. In its debut season, Viking Star was awarded the cruise industry’s highest honors, including being named Best New Ocean Ship and scoring a 5-star rating by the editors of Cruise Critic, as well as receiving the highest rating in the mid-size ship category in Berlitz Cruising & Cruise Ships 2016.
“Port St. Maarten and the destination are looking forward to welcoming Viking Star to our shores next week Wednesday. The cruise line has introduced new itineraries to explore the Americas and the Caribbean.
“The Viking Star made its first transatlantic crossing and arrived in New York en route to the Caribbean to start its winter sailings as part of its 11-day West Indies Explorer itinerary. On October 11 the vessel officially commemorated its first United States port of call in Boston.
“We look forward to building a strong partnership with Viking Cruises as we nurture and develop this new relationship. By 2020 the company will operate six 930-passenger ocean cruise ships; currently the two ships in the fleet sail itineraries in Scandinavia and the Baltic; the Western and Eastern Mediterranean; and the Caribbean and North America.
“Port St. Maarten remains cognizant of the trends and developments in the cruise industry and remains committed to the destination with respect to growing our cruise sector,” Port St. Maarten Management said on Tuesday.
Viking Cruises is a small growing cruise line which places emphasis on new ways to bring the line’s unique destination-focused approach to more regions of the world.
The line’s Caribbean itineraries are inspired by iconic 18th-century navigation routes and were developed to highlight the rich history and culture of the region that includes destination Sint Maarten.
Viking Star will homeport out of San Juan, Puerto Rico. The vessel will return to Europe in February 2017, with a transatlantic sailing from San Juan to Barcelona, Spain.