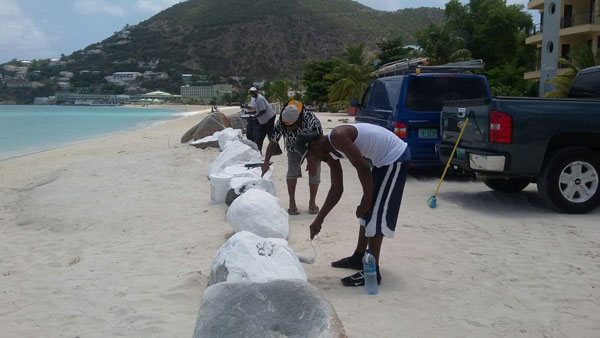 POINTE BLANCHE:— Port St. Maarten is very much aware of the importance of sea turtles to the environment and plans to do its part where it concerns sea turtle awareness in conjunction with the Nature Foundation.
The Walter Plantz Square (WPS), a community development project of the Port, sits on Great Bay Beach at Down Street, which is one of the most popular turtle nesting places on the island.
WPS as part of its social community responsibility is working with Nature Foundation and children from the down town area and Down Street along with the community to paint the boulders to create awareness about turtle nesting on the island.
Each year between April and November, female sea turtles return to lay their eggs on the major nesting beaches of Simpson Bay, Guana Bay, and Gibbs Bay and other beaches on the island. There are three sea turtles which nest on St. Maarten beaches, including the Green Sea Turtle and the largest sea turtle species, the Leatherback.

According to the Nature Foundation, sea turtles have existed for well over 180 million years, even before the dinosaurs. St. Maarten is one of the few places in the region that has a nesting population of sea turtles.
The boulders placed at the beach are to prevent vehicles from driving on the beach in the vicinity of WPS. This creates a safe environment for the turtles to nest on the side closest to the water.
Signage will also be erected along the entire boardwalk to alert pedestrians and beachgoers about turtle nesting season.
Sea turtle population numbers have plummeted to dangerously low numbers throughout the past century due to human impacts, bringing many species close to extinction, causing them to be listed as critically endangered, according to the Nature Foundation of St. Maarten.

Port St. Maarten and WPS will do its part to create the necessary awareness in conjunction with Nature Foundation about the turtle nesting season which has started and runs for several months.

In order to reverse this trend, all sea turtle species are now protected by international laws and treaties as well as local laws. Based on ARTICLE 16 and 17 of the Nature Conservation Ordinance St. Maarten it is illegal to kill, wound, capture, pick-up, have animals that belong to a protected animal species, to directly or indirectly disturb their environment resulting in a physical threat or damage to the fauna or to commit other acts which result in disturbance of the animal.