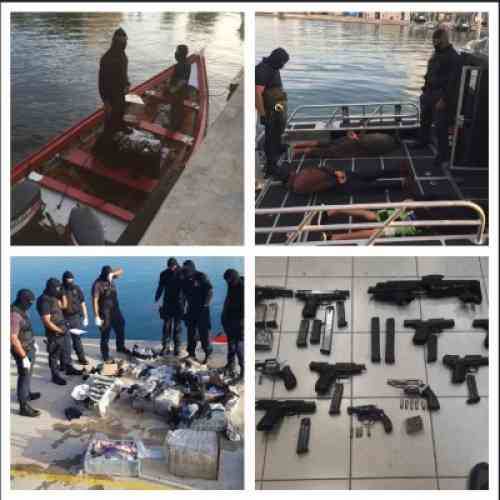 WILLEMSTAD:— In the early hours of the morning of Friday September the 28th the Dash surveillance plane of the Coast Guard detected a small craft in the territorial waters of Curacao. The Dash crew saw three (3) persons on board. Subsequently the Dash contacted the Rescue & Coordination Center of the Coast Guard, who in turn alerted a patrol of the Metal Shark. The Metal Shark crew was deployed to intercept the craft which was heading in the direction of Klein Curacao. At 6.5 miles south of Klein Curacao the craft was intercepted and the persons on board were detained. The craft and the persons on board were brought to the Coast Guard wharf, after which the craft was searched and an amount of packets and a monkey was found on board. After rounding off the formalities, the packets, monkey and the three persons were handed over to the authorities. The packets contained approximately 148350 grams of cocaine, 6805 grams of marihuana and a large amount of weapons. The case is under investigation.