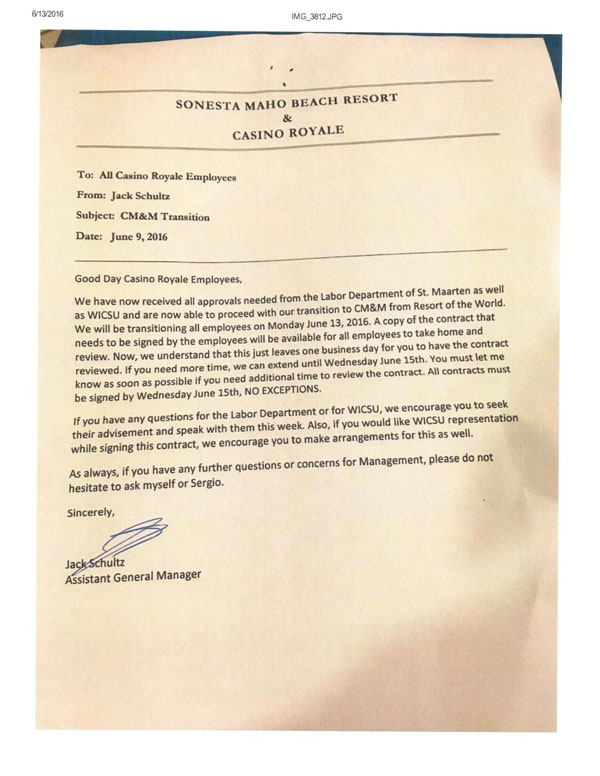 PHILIPSBURG:— Questions are being raised now that the agreement the Windward Islands Civil Servants and the Private Sector Union (WICSU/PSU signed with Maho Hotel Operations B.V. surfaced, a document workers of Maho Hotel Operations B.V and members of the WICSU/PSU did not see even though a representative of WICSU/PSU Juilia Solagnier signed on behalf of the workers.
Some 40 employees of the company working at Casino Royale refused to sign the agreement that is now termed as a transfer agreement. At first Maho Hotel Operations had a Termination agreement. SMN News also obtained a letter the company sent to the workers of Casino Royale where they stated that they have obtained clearance from the department of labor to terminate the workers.
In a letter to SZV the company wrote that they will annul the process if by any chance they does not obtain a business license in the name of the new company CM&M. SMN News learned that the new company still did not get its license yet the negotiations and transfer procedures are ongoing.
On Wednesday the attorney representing the workers walked out of a meeting that was being held at Maho after the developer chose to ‘shut up’ the attorney by refusing to let her defend the rights of her clients.
Another meeting with the workers and their representatives is scheduled to take place on Friday at Sonesta Great Bay as the current employer continues to force employees to sign the agreement even though many of them worked for the company for several years.
Based on the agreement Maho Hotel Operations and WICSU/PSU signed it is clear that Saro Spadaro will remain the owner of the new company CM&M. Clearly there seems to be some kind of kinky business going on under the nose of the Minister of Labor who seems not to be paying attention to the plight workers are going through and instead of dealing with the matter head on he stated that the labor mediator is dealing with the matter.
It’s been months now SMN News have been calling on the Minister of Labor to look into what has been taking place at Maho Hotel Operations since several employees that have been working for the company for 35 or more years were fired.
Another issue SMN News raised is the amount of foreign workers this particular investor have been bringing into St. Maarten since they managed to obtain an agreement from former Minister of Justice Roland Duncan which allows the company to bring in workers from Sandals Resort from around the Caribbean. While the agreement the company obtained from the former Minister of Justice Roland Duncan clearly stated that workers from Sandals Resort are only allowed to come to St. Maarten to provide training most of those that were brought in were hired as General Managers, chefs and sous chefs while local workers are not getting any type of promotions.
Member of Parliament Christopher Emmanuel questioned this procedure by writing a letter to the Chairlady of Parliament Sarah Wescot Williams, but so far the Minister of Labor Emil Lee does not seem to know what really is happening in the labor market while the economy on St. Maarten is declining.