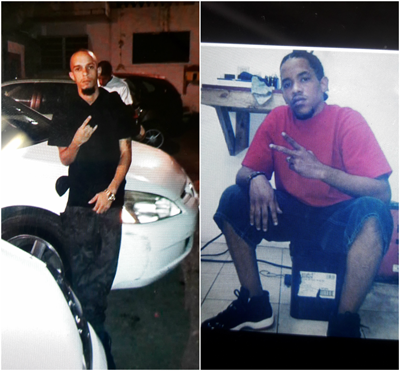 PHILIPSBURG:— As the investigation of the two (2) missing young men, E. ROSARIO (23 years old) and L. DIAZ SARANTE (23 years old) , continues, the home of one of the men has been searched. The men had been both reported missing since Monday, December 5 2016.
The detective Department remains diligent in search for these two young men and all possible leads are being looked into. The community is asked to lend assistance that may lead to finding them. Anyone with relevant information is asked to call the Police Station 542-2222 ext 208 or 211.
If you wish to stay anonymous, you can call the tip line at 9300 (free of charge) or send a private message to our Facebook page Police Force of Sint Maarten.

Three women robbed
Philipsburg: On December 10th 2016, at approximately 00.35 am (twelve thirty) three female were robbed of their belongings as they walked along the Juancho Yrasquin Boulevard. The three ladies were on their way back to their boot that was anchored at the Point Blanche Pier when they were suddenly attacked by an armed man dressed in dark clothing. Their purses were taken during the attack. One of the women was struck on the head, but luckily she did not suffer any injuries that needed medical attention. Their wallets were later found in the surrounding area. Detectives are busy with the further investigation.