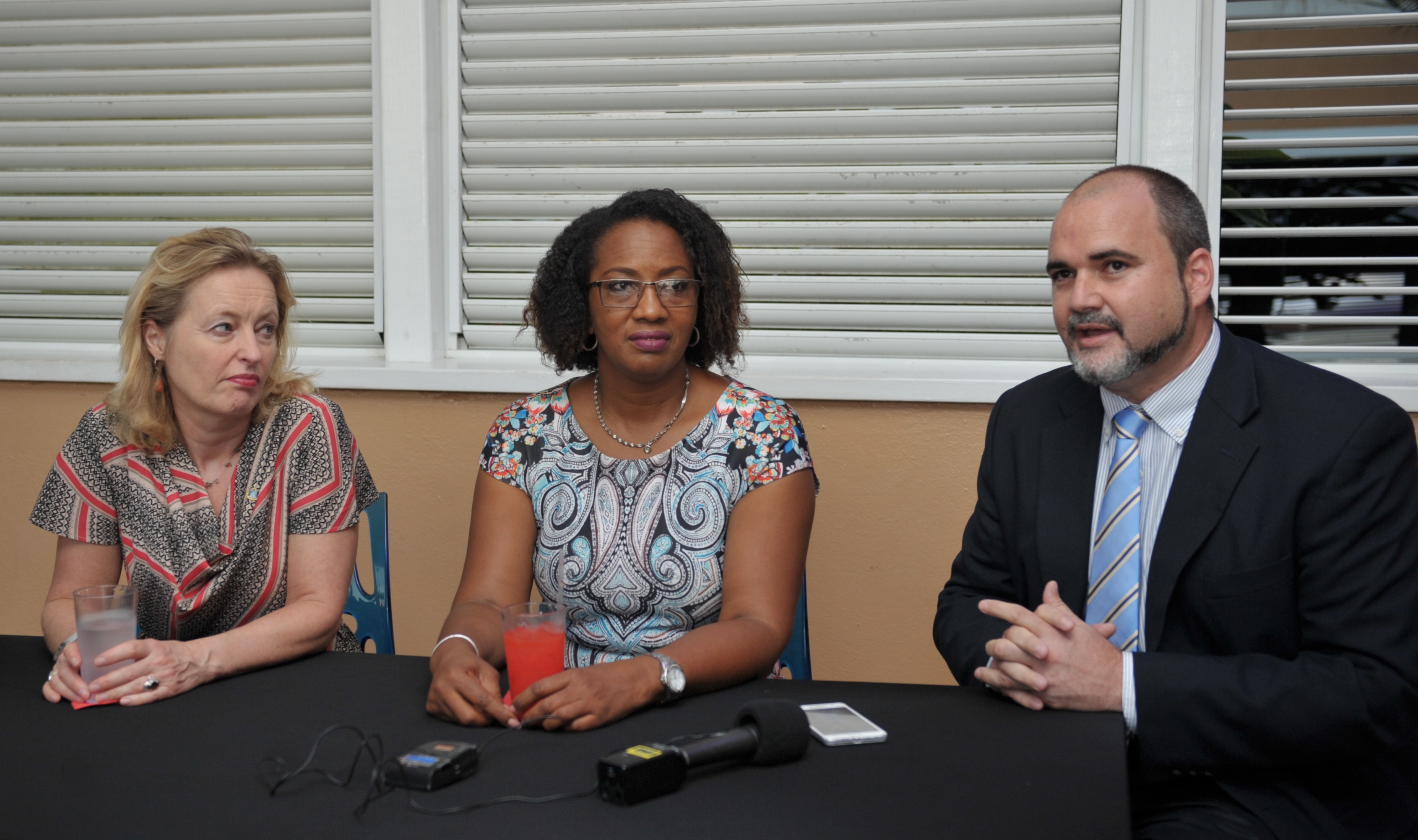 Education Minister Jet Bussemaker:
“All students have to pay back their study debts”
GREAT BAY – Dutch Education Minister Jet Bussemaker said yesterday that she does not know how much local students owe in study debts to DUO, the ministry’s executive branch for study financing. But in April, DUO told this newspaper that the combined outstanding debt is €25 million – at the current rate $26.5 million or 47.7 million guilders. In April these debts were still worth $28.5 million and 51.1 million guilders, so the euro’s decline favors local students. Bussemaker made one thing clear though: “All students have to pay back their study debt.”
Minister Bussemaker spoke briefly last night with journalists at a press conference near a swimming pool at the Divi Little Bay Resort, in the company of Minister Silveria Jacobs (Education, Culture, Youth and Sports).
Bussemaker is visiting all Caribbean islands that are part of the kingdom. In St. Maarten she spoke with Jacobs at the Government Administration Building and she visited the National Institute for Professional Advancement (Nipa) and Fort Amsterdam.
Jacobs said that the talks focused on collaboration. “Our discussions covered several topics that will be formalized in the future,” she said.
Bussemaker is interested in collaboration with St. Maarten to get students from Saba and Statia into courses at Nipa. “We need not only students in academia, but also students in vocational training,” she pointed out.
Minister Jacobs referred to the emergency repairs that have been executed at fort Amsterdam under the supervision of archeologist Jay Haviser’s Simarc. There will be an official ceremony to celebrate the completion of the work on December 15 – which happens to be Kingdom Day, a national holiday that is no longer observed in St. Maarten because it has been replaced with Constitution Day on the second Monday of October.
“We have to work together,” Minister Bussemaker said in a brief introduction. She noted that students have high debts and that it is difficult for them to pay it back.
“From January on there will be local bank accounts available for the repayments. That will make it easier to repay the debts,” she said.
DUO has however trouble finding the students with outstanding loans, but Minister Jacobs is ready to help tracking them down. “Collaboration on study financing is in the plans,” she said. “Some of the students don’t pay back, not because they don’t want to, but because it is too expensive. Payment through a local bank will make this more feasible.”
Bussemaker said that Fort Amsterdam could become “a cultural heritage proposal for the kingdom.”
Asked what the Dutch Education Ministry has to offer to St. Maarten, Minister Bussemaker had a brief answer: “Knowledge and teacher exchange.”
Top photo caption: From left: Minister Jet Bussemaker, Minister Silveria Jacobs and Dutch Representative Chris Johnson. Photo Today / Milton Pieters
Photo above caption: Dutch Education Minister Jet Bussemaker shaking hands with St. Maarten Education Minister Silveria Jacobs. Photo Today / Milton Pieters