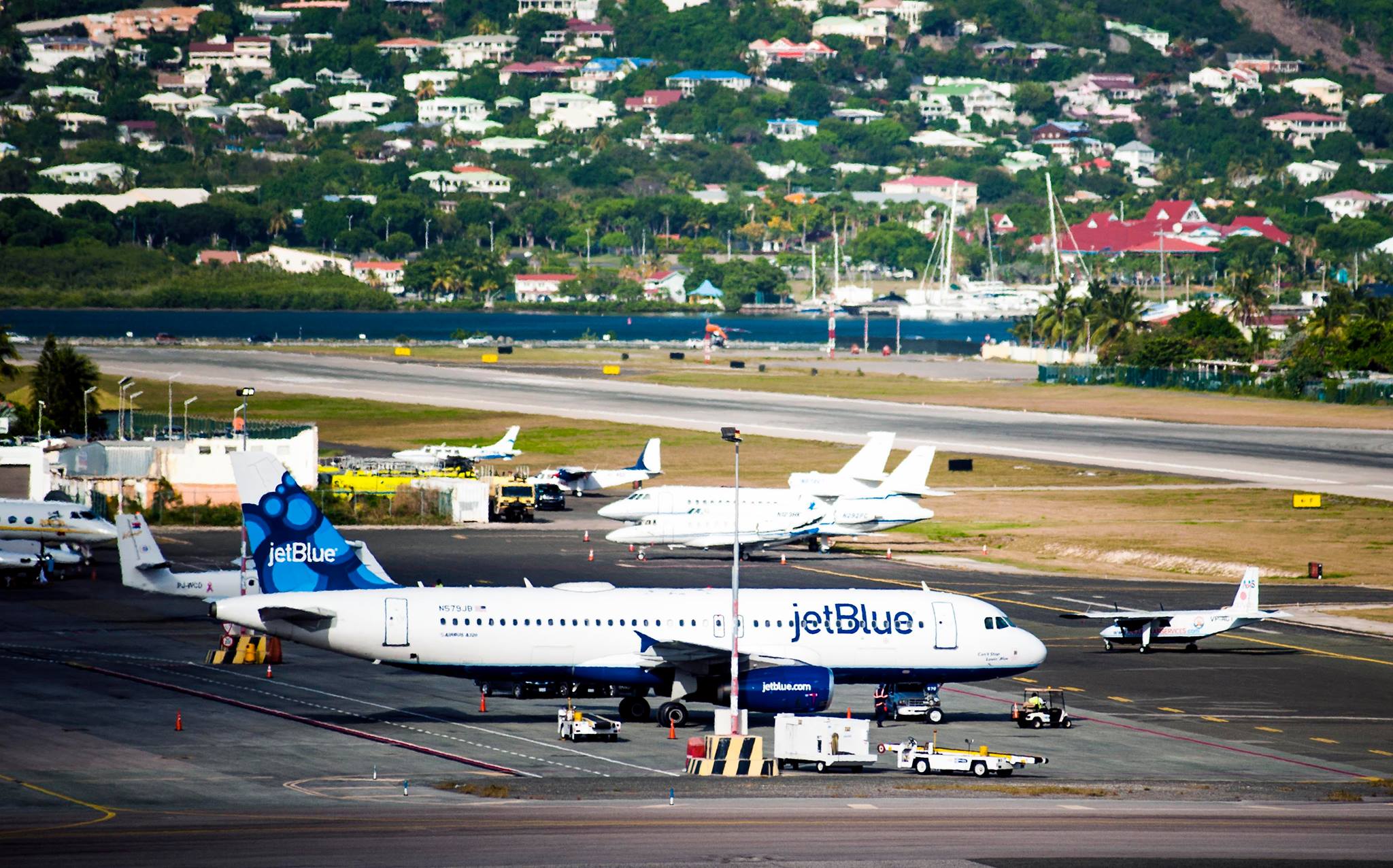 AIRPORT — SXM Airport was on lockdown this afternoon around 3pm after a bombthreat notice came in to police authorities regarding a Jetblue flight B6 77 out of Boston that was scheduled to land at 11:13am this morning and only landed in St. Maarten at 3:07pm. Instead of the scheduled departure time of 7:05am, the aircraft, an Airbus A321, departed Logan International Airport at 11:12am with a four delay.

The aircraft was parked on the SXM Airport runway as authorities executed searches and looked into getting the passengers safely off of the aircraft and into a safe holding area where both passengers and their luggage were thoroughly screened and searched.
Eventually, passengers were cleared and allowed to leave the holding area sometime after 4:30pm. Up to this moment no bomb has been found. However, flights to and from SXM Airport were cancelled or redirected to the San Juan airport in Puerto Rico.
Photo caption: The Airbus A321 of Jetblue flight B6 77 parked on the runway at the SXM Airport. Photo by Milton Pieters.
###
Official release from the Department of Communications (DCOMM), Sint Maarten:
Bomb Threat at Princess Juliana International Airport; Roads temporarily closed to the airport until further notice
GREAT BAY, Sint Maarten (DCOMM) – Roads leading to the Princess Juliana International Airport (SXM Airport) remain closed at this point in time at the Simpson Bay Causeway round-a-bout and from the Maho round-a-bout in connection with a bomb threat at SXM Airport related to a JetBlue flight.  The bomb threat was received by authorities around 2.00PM.
Motorists are requested to avoid traveling to SXM Airport at this point in time.  Police check-points have been established at both round-a-bouts.
Persons traveling today will have to check with their airline with respect to when they should travel to the airport in connection with their flight.
Information provided here was from the Police spokesperson and sent via DCOMM.
###
All Clear Given. Princess Juliana International Airport Open; Temporarily closed roads open
GREAT BAY, Sint Maarten (DCOMM) – The authorities have given the all clear, and Princess Juliana International Airport (SXM Airport) is now open.
Temporarily closed roads leading to the airport from Simpson Bay Causeway round-a-bout and from the Maho round-a-bout were re-opened between 4.00pm/4.30pm.
According to Police Spokesperson Inspector Ricardo Henson, the Emergency Police Dispatch Center received a call after 2.00pm about a bomb threat regarding a JetBlue flight at the airport.
The Emergency Services responded to the threat and dispatched Police, Fire and Ambulances to the SXM Airport where bomb threat protocols were executed.
Also involved in the emergency response were the Airport Security, Airport Fire Department and Airport Ambulance Service.
After the aforementioned services carried out their bomb threat protocol response, the all clear sign was given by local authorities.
Authorities are continuing with their investigation with respect to the bomb threat that was made on Saturday.