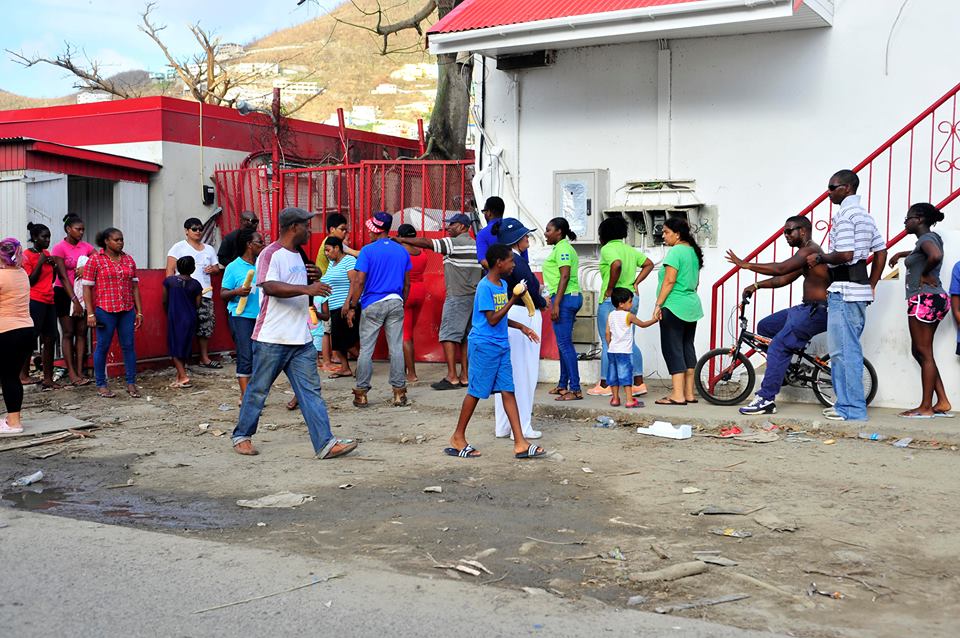 Cul-de-Sac — The day after Hurricane Irma passed word spread fast in the Cul-de-Sac area and beyond that Cake House Supermarket was giving out free bread to neighborhood residents.

Residents were simply asked by the Cake House Supermarket manager, Rolex, to adhere to one simple rule: “Line up in an orderly fashion and no misbehaving, else we will stop giving out bread immediately.”

Initially, the supermarket gave out two breads in a sack per person. But as more people came from as far as Sucker Garden and other districts, this amount was quickly rationed down to one bread per person. Breads were given out wrapped in a napkin as obviously the sacks had ran out quickly.

At no time was there no need to police assistance as the supermarket management and staff with the assistance of neighborhood residents managed to keep order at the supermarket back entrance to the bakery. Ofcourse, there were minor disputes at times as people tried to cut in line or when there was confusion where the lines ended or started. However, arguments were quickly squashed as no one wanted to risk not getting bread.

One week later, and slowly other supermarkets started to open up their doors and allow neighborhood shoppers to enter the supermarkets under strict supervision. Only two or three people at a time entered into the supermarket premises to buy badly needed groceries. Water and flour were many of the items that quickly sold out.

Many supermarkets remained securely shut out of fear of looting and being overrun by mobs of people desperate to get their hands on any available food and drinking supplies. Some of these supermarkets could be seen with the owners and staff standing or sitting outside protecting their property. Police assistance were often called in to ask neighborhood residents to disperse.

As the situation continues to normalize, the announcement was made today, Thursday, September 14th, that the following supermarkets will be opened daily as of September 15th, 2017:

The Police Department of St. Maarten would like to inform all supermarkets that are ready to open that the police is ready to support them and that they can contact the Police Station directly at (+1-721-)542-2222 for any assistance needed.