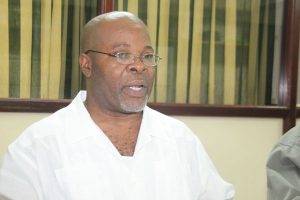 GREAT BAY – Government must get its act together and create opportunities for locals and not focus so much on immigrant labor, businessman Greg Arrindell says in a reaction to the Ministry of Justice’s decision  to ramp up controls to ascertain whether or not businesses are employing undocumented workers. “It cannot be that you are going to outrun the economic basin that has been sustained by your locals – the mom and pop shops, taking care of their families…that today you are ready to wipe them out because you are thinking only of imposing tax and not taking responsibility for your citizens.”

Arrindell, who represents businesses in the Downstreet area of Philipsburg on the Downstreet Business Council, suggested that the country’s immigration policy cannot wipe out the local contribution of citizens on St. Maarten and that government has a responsibility to its citizens. “You should provide the necessary tools, the education system that would allow all of our people to have adequate access to economic growth, financial benefits, and at the same time the commitments to your country that they should not feel inferior in their own country.”

St. Maarten must implement some level of control from an immigration standpoint, Arrindell says,  because other countries in the Caribbean are doing the same. He referred to Caricom countries that, although they have a free movement of people regime, still limit immigration to certain professions and don’t allow a wholesale admittance of people into the respective countries. Even expatriates who have made St. Maarten their home feel that their livelihood and their children’s future are threatened because of illegal immigration, Arrindell said.

Arrindell acknowledged the challenge as it pertains to immigration control, noting that the authorities are probably fearing the immediate effect on the economy. “Whenever you start imposing immigration rule you find that the buses are losing money because immigrants are no longer comfortable jumping in the buses,” he hinted as one of the examples of effects on the economy.

Justice Minister Rafael Boasman said last week that the increased immigration controls will continue. “Illegal workers will have to leave the island, their employers will be tackled and I will be mentioning their name,” he said.

Boasman started his naming and shaming campaign by identifying the Sky Beach Restaurant in Maho as a business that had been at the receiving end of an immigration control. “Six illegal people were working there; that’s practically the whole staff. These are functions like waiters and waitresses, so they’re not highly specialized.”

The restaurant later said that the workers were hired though a job agency.

The minister, a former unionist, had harsh words for companies that employ people illegally. “All employers ought to be ashamed of having people working illegally, depriving them of medical insurance and depriving their children of the right to go to school. It’s not just a matter of taking jobs away from locals.”