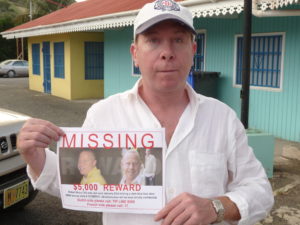 GREAT BAY – Exactly seven years after his mysterious disappearance, the car of American Robert Brous has been found, after tourists spotted it in the sea near the Walter Plantz Pier on Sunday morning around 9 a.m.
The car, a dark blue BMW381i, is according to the police “possibly” the vehicle Brous rented in 2010. Chief Inspector Ricardo Henson dismissed media reports that a body had been found in the car.
The police have impounded the car for analysis and it released a picture of the car to the media.
The French-side website soualigapost.com reported however based on police information that the car was rented back in 2010 by an American tourist who stayed at La Samanna. That man was Robert Brous.
Brous was a New Yorker who lived in Los Angeles. In February 2010, his brother Buzzy came to St. Maarten in a vain attempt to find answers to the disappearance.
While he thought at the time that his brother had become the victim of foul play, the investigation will have to determine whether this is really true.

Brous made a living in interior construction and design in Beverly Hills. He had come to St. Maarten on a four-day break from his business with a girlfriend. The couple stayed at the luxurious La Samanna resort just over the Dutch-French border in the Lowlands.
On January 23, he rented a dark blue BMW 381i at the front desk and told his girlfriend that he was going to the other side of the island.
“He came back at five o’clock in the morning to get something and then he left again,” Buzzy Brous told this newspaper back in 2010.
The last one to see Brous alive was a gas station attendant in Marigot who sold the American a jerry can of gas. “They said he was dirty, that he was not wearing any shoes and that his car had run out of gas in Friar’s Bay,” Buzzy related the findings of the gas station attendant.
The car was reportedly spotted once, a couple of days after the disappearance. There was no activity on Brous’ bank account since he went missing and he had left all his clothes at the hotel.
Buzzy, one year older than his brother at the time, described his sibling as a very friendly man. “He would talk to anybody. He was a very funny guy too; he would make you laugh. He made contacts with people very easily.”
Brous pleaded at the time with the local population for answers. “Please have a heart and let me know what happened,” he said at the time. With the retrieval of the car, investigators may now be able to provide at least some answers.

Photo top caption: Buzzy Brous shows a flyer in February 2010 with a picture of his brother that offers a $5,000 reward for information. File photo Today / Hilbert Haar
Photo above caption: The BMW is lifted out of the water near the Walter Plantz pier. Photo KPSM