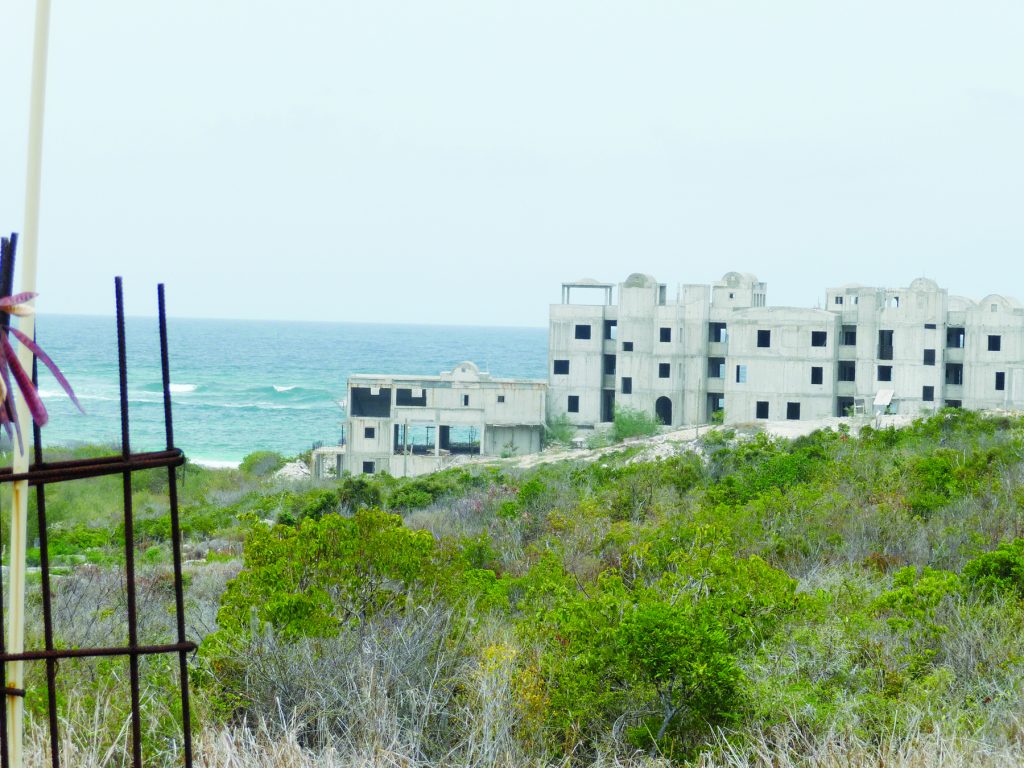 .GREAT BAY – People who bought into the failed Aquarius project in Red Pond will not see a penny of their investment, it appears from the second public report about the bankruptcy of Sabra NV and Aquarius Company Ltd. trustee Norbert Heijmans submitted to Judge of Instruction Mauritsz de Kort this week. The remaining assets have a value of $20,704.16, while the tax inspectorate, as a preferential creditor, has a claim of $336,516.85 on both companies.

The trustee intends to start procedures against the directors of Aquarius and Sabra, Andrew and Marc Erato and against the two companies.

In 2013 a group a buyers went to court to demand the bankruptcy of the companies of which Marc and Andrew Erato were the directors, with their father Johnny Erato in the background.

The buyers put up millions of dollars in pre-construction down payments for the Aquarius project in Red Pond but when the economic crisis hit in 2008, the project collapsed and it was never finished. After Aquarius appeared unable to pay its mortgages, the project was auctioned and bought by a company called Rose Garden BV.

Aquarius was supposed to become a luxury resort with 280 seaside villas built under Greek architecture. Hyatt Hotels was contracted to manage the rental pool of these properties for which investors had to pay between $795,000 and $895,000. Under pressure of the crisis, Aquarius dropped its prices by $150,000 but it was not enough to attract more buyers and to save the project.

Yet in February 2010, Marc and Johnny Erato told this newspaper that construction was back on track and that a 40-strong crew was busy finishing the first units. It never happened.

Prospective buyers in the meantime, had between them made down payments worth more than $10 million.

Attorney Michiel Noordhoek described the Acquarius Company Ltd. at the time as an empty shell that never had any capital. Prospective buyers entered into contracts with Aquarius, while the actual owner of the real estate was Sabra NV.

Noordhoek, in a reaction to the situation to this newspaper in 2013: “To avoid as much liability as possible, sales went through Aquarius. But there is nothing to get there. Sabra did have capital, but during the past couple of years several assets have been moved to other Anguillan entities. That is vile. Nobody knows where all the money went that my clients paid. And in the meantime you see Marc Erato sailing around in his speedboat. They have been busy with these kinds of practices for more than twenty years.”

In 2006 Sabra NV extended personal loans totaling a bit more than $4 million to Marc and Johnny Erato, it appears from the company’s 2006 annual report.

Trustee Heijmans, who spent more than 525 hours on researching the bankruptcy up to 2015, writes in his second report that he found no assets at Aquarius.

That the bankruptcy research took so long is unusual, the trustee notes. “This is predominantly due to the fact that the usual information was provided not at all, incorrect or incomplete; an accessible administration and a proper explanation for the numbers are lacking as well.”

On May 20, 2016 the trustee interrogated Johnny Erato, the father of the two directors. “Andrew referred to him for answering several questions. The interrogation only revealed that there is no preparedness to open up.”

Remarkably, the two companies did not have any employees, stock or assets. The trustee managed to sell one right of apartment for $23,400. Banks have an outstanding claim of more than $1.3 million, while the tax inspectorate has a claim of $336,516.85.

The trustee furthermore notes that the companies are guilty of maladministration, by not keeping proper financial records, not compiling an annual account and not filing a tax return, “The only annual account they made shows that both directors, their family members and associated parties withdrew significant amounts of money from Sabra, while they have not been able to make it plausible that they repaid this money.”

Insofar the directors did not act fraudulently, the trustee writes, they acted at least wrongfully. “The receiving companies and the directors are individually responsible.”

These remarks refer to the fact that in 2008 rights of apartment were transferred to a different entity, “for the sole reason of preventing an attachment.”

Under these circumstances, Aquarius was no longer able to deliver the apartments to its buyers. “This does not result in a disadvantage for the creditors of Sabra, but this does not apply to the transferred real estate for which the purchase price had not been paid yet and of which the proceeds no longer benefited Sabra,” the trustee points out, adding that in 2010 several pieces of real estate were transferred to other entities without payment.

The directors are liable and possible limitations have been stemmed, trustee Heijmans writes about his plan of approach at the end of the report. “The Judge of Instruction has been asked for permission to start procedures against the directors and against the obtaining companies.