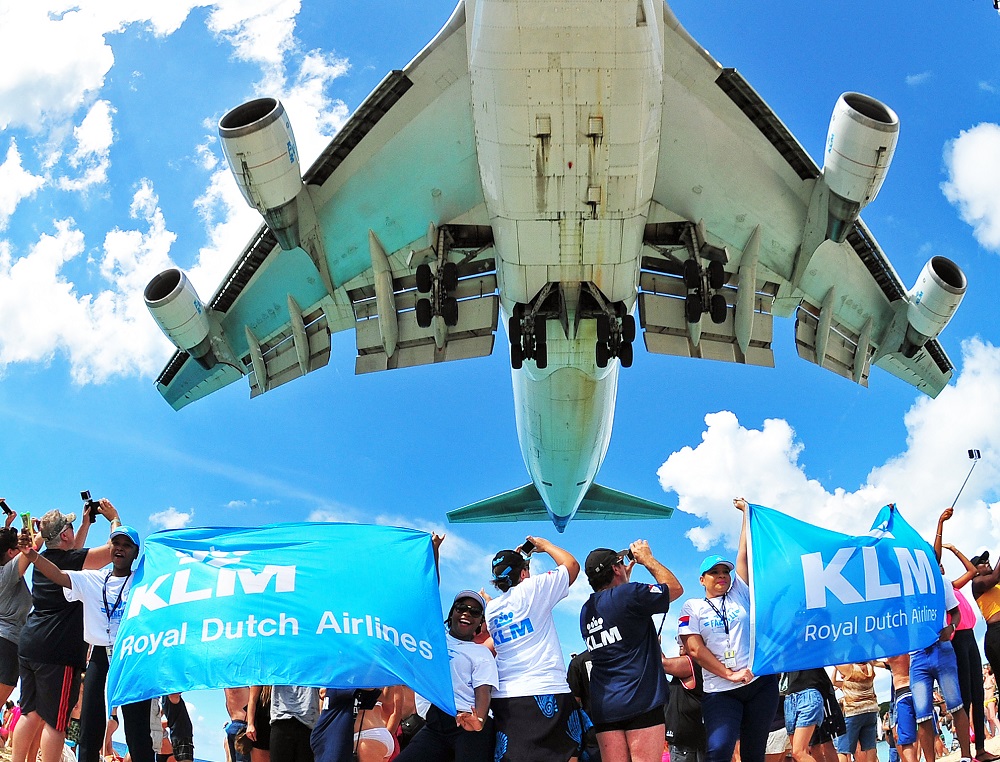 GREAT BAY– Watching a plane carrying a family member or close friend depart from up close or even from a distance can have that emotional roller coaster effect. But what happened when KLM’s Boeing 747-400 lifted off from the Princess Juliana International Airport last Friday for the last time is not easy to describe.
It was as if it was the end of a love affair, only this time, it was not an affair involving two people. It was one that involved the trademark blue and white aircraft with the hump and those that had the pleasure of experiencing the majestic beauty from a few feet away.
As was expected, it did not take very long for the stretch of beach between Sonesta Maho and Sunset Beach Bar to buzz with human activity. It was like a carnival atmosphere with everyone looking for the best vantage spot.
Staff from the local KLM counter were on hand to distribute branded T shirts and matching caps, but that supply soon ran out; the airline’s dominant colors were visible from a distance.
The crowd which was getting bigger by the minute was kept informed about the estimated time of arrival, ETA and the excitement among those gathered for the special event was palpable.
The excitement almost reached its zenith when the plane was finally spotted, a tremendous roar rose up from the crowd. But the plane was not ready to make its last approach because it had permission to do a fly by.
Than the Boeing 747-400 became the focal point in the real sense with hundreds of cell phone and a few dozen professional still and movie cameras were all pointing in the general direction of the plane as it made its final iconic approach.
The excited sounds from the gathering could not match those from the four engines of the 747-400 as it inched closer and closer. Then in less than 90 seconds, the 652,000 pounds aircraft with a 211 feet 3 inch (71 meters and 93 centimeters) wing span soared across the beach and less than 30 feet (9.14 meters) over the heads of the exciting onlookers to land at the Princess Juliana International Airport for the very last time.
The airport’s management had a special ceremony on the agenda after the passengers had disembarked. But this newspaper was not privileged to get close to that aspect of the farewell.
After an almost hour stop over, it was time to say goodbye in the traditional way. With the bright yellow water cannons in position, the 747-400 was doused with water from two directions as it made its way towards the runway.
It was the beginning of the last countdown and the crowd at the Sunset end of the runway had increased immensely, they were waiting patiently for the final blast and the plane’s captain knew that.
For the second and last time on St Maarten, the 747-400 was the focal point as the four engines were powered up and the parking breaks were released. The expected and often dangerous commotion it caused as it sped down the runway was something only those visiting St Maarten and its residents can talk about in the future.
Photo caption above: Staff of the local KLM office displaying the company logos were in the right position as the 652,000 pounds (295,743 – the maximum landing weight) passed a few feet over their heads while on its farewell flight to St. Maarten last Friday. Photo Today / Milton Pieters

Photo caption: The rider of this scooter who appears to be giving an eye right salute was suitably attired for the occasion. Photo Today / Milton Pieters

Photo caption: Armed and ready, this was just one of the professional photographers that wanted to record the departure ceremony from Beacon Hill. Photo Today / Milton Pieters

Photo caption: The Boeing 747-400 gets the traditional wetting from water cannons a few minutes before it departed St Maarten for the final time. Photo Today / Milton Pieters

Photo caption: The Boeing 747-400 on her last trip down the runway at the Princess Juliana International Airport. Photo Today / Milton Pieters