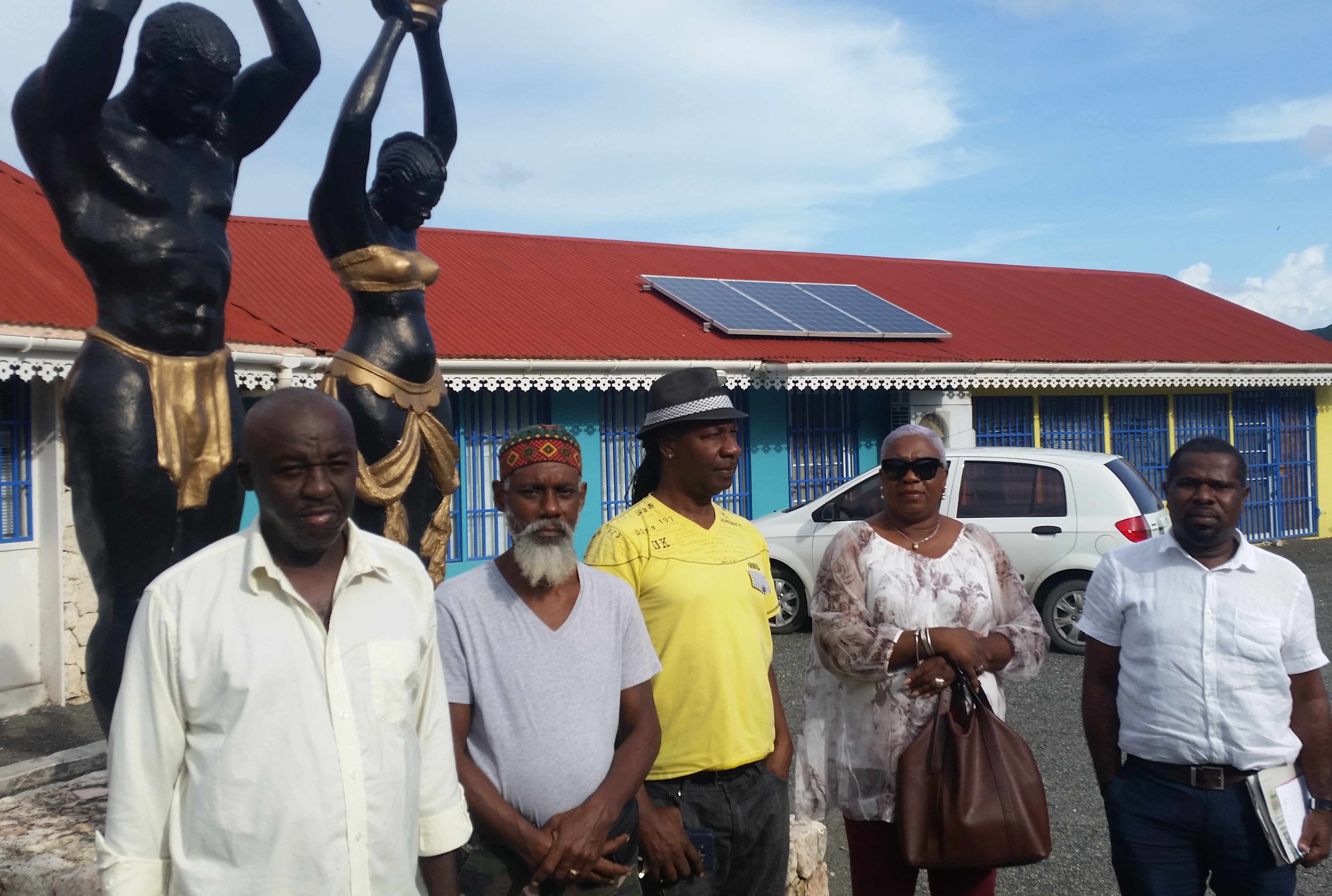 GREAT BAY – On Thursday morning at 8.30 a.m. the court in Marigot handles the case of Nadika Stephen, a member of the Soualiga Grassroots Movement on charges of using racial slurs against officers of the Police Aux Frontières (PAF), the French immigration services. The Grassroots Movement is fielding a small battalion of attorneys for Stephen’s defense.
Harry Durimel, Sarah Aristide, Maître Eslin and Evita Chevry all come from Guadeloupe to saint Martin for the occasion. Present at the court case will also be historian Daniella Jeffry, Elie Domota, a union leader from Guadeloupe and Julien Merion, a law professor.
Howard Whit, president of the Soualiga Grassroots Movement and members Freddy Richardson, Robert van Heijningen, DJ X-Rey and Nadika Stephen sat down with Today to discuss the situation yesterday. A year ago, the Grassroots Movement also gave an interview about the case. Thursday’s court case is a continuation of the hearing that took place in September of last year.
The troubles for Nadika Stephen started after her 37-year-old son was wrongfully arrested by the PAF on June 23 of last year. what happened afterwards got her in legal troubles. “But this is not a Nadika case,” she says. “This is a larger issue that concerns all locals. We want to make clear that we are not the immigrants here.”
Howard Whit agrees: “This has to do with officers of the PAF that are not tolerant towards the cultural specifics of our society. It did not have to be this way, but in the meantime, Nadika ends up with this situation.”
PAF officers arrested Kevin Stephen on Union Road during a control of a bus he was traveling on. Because he could not immediately find his ID, they arrested him after an unpleasant exchange of words.
“He was thrown on the ground, handcuffed and subsequently detained at the PAF-office in Concordia for eight hours, only because he called the PAF stupid,” Nadika said at the time.
The distraught mother staged a protest at the PAF demanding her son’s release. A month later the PAF interrogated her about the use of an alleged racial slur during this protest.
Now the case is back in court this week. “The concern we have,” Whit says, “is that she will end up with a police record if the court convicts her. That will cause all kinds of troubles and make traveling abroad more complicated.”
“We want answers about what is taking place,” Freddy Richardson adds. “There are currently between 300 and 400 gendarmes on the French side. What is the plan? Why is this taking place?”
Richardson is also concerned about the liberal granting of residence permits to foreigners. “We have more than 4,000 people unemployed,” he says. “But at the Préfecture you see every morning dozens of people waiting for their papers.”
How does this tie in with the Nadika Stephen case? “It is racial,” DJ X-Rey says. “It is a black and white issue. If this had been about a white couple, it would never have gone to court. They should not do these controls with foreign officers; they ought to work with the local police.”
“The gendarmes have a military training background,” Richardson continues. “They are rude and they insult you, saying that we are here to collect handouts from France.”
“I don’t think this has anything to do with my son,” Nadika Stephen says. “I rebel against the way they handled the situation. It is unfair to hold somebody from the island in custody on an immigration issue.”
Stephen says that her interrogation by the PAF deteriorated when she refused to speak French and opted for her maternal language English. “They told me: we are in France. But we are not; we are in Saint Martin. I am a Martinoise with an French ID but I do not feel like a French person. This is why they accused me of spitting on the French passport. But I did not scream at them or use foul language.”
“We expect them to realize that Saint Martiners are not that submissive,” Howard Whit says. Central to this case is that Nadika has no relation to the incident with her son.”
“We expect the court to drop the charges against Nadika,” adds Freddy Richardson. “Otherwise this case will go to another level and it would be the beginning of real problems.”
Robert van Heijningen says that Nadika is simply fighting back. “When they realized who she is – a member of the Soualiga Grassroots Movement – they wanted to break us. We are a radical group and that is why they have turned a misdemeanor into a criminal case.”
The five lawyers from Guadeloupe will host a press conference tomorrow evening at 6 p.m. at the Chamber of Commerce in Concordia.