Home StMaartenNews “His voice was a reflection of his personality” 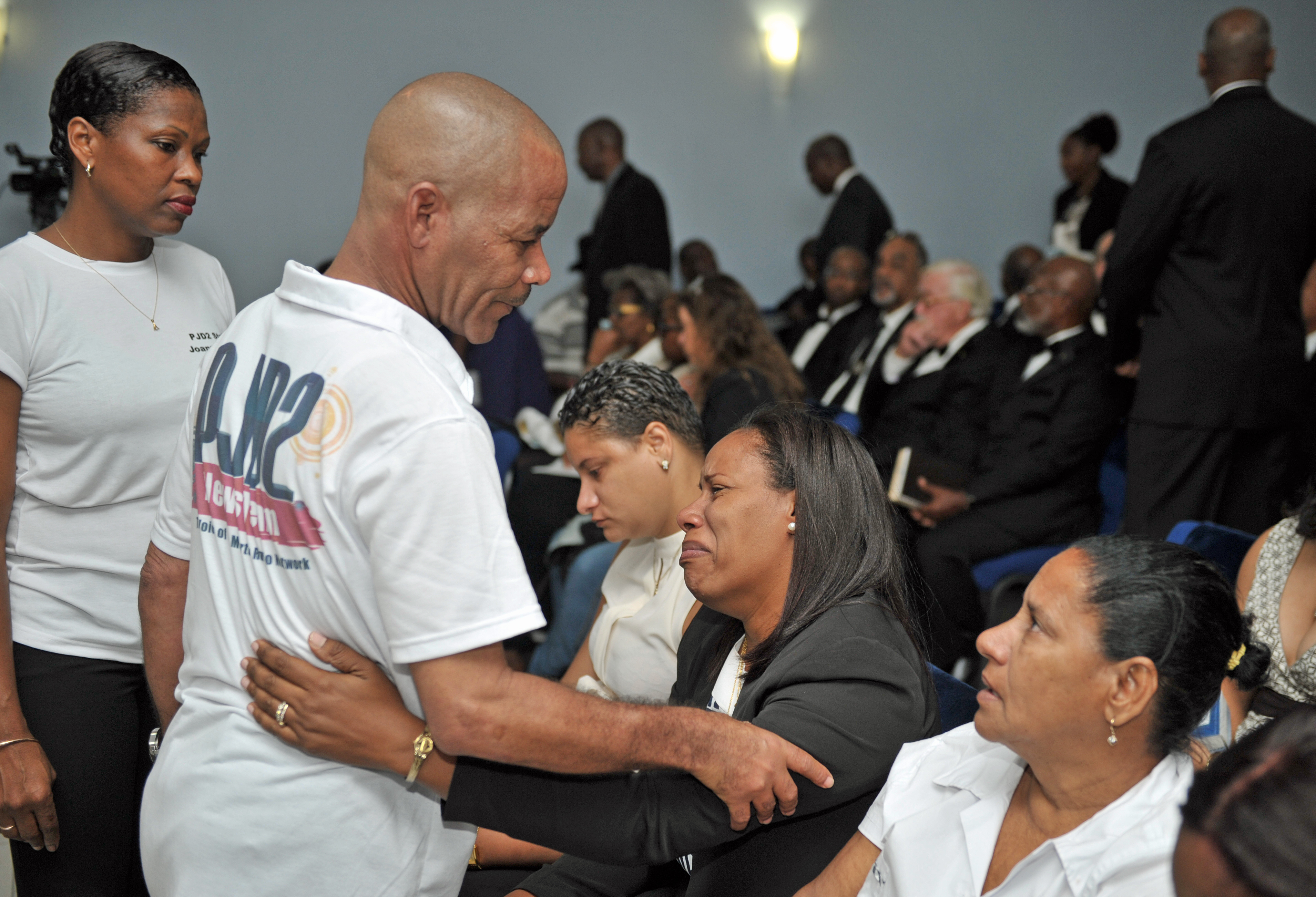 Photo caption: Steven Cyrillien, co-worker and long-time friend of Allen Jr. greets Brenda. Photo Today / Milton Pieters
PM Marlin at funeral Samuel Allen Jr.
“His voice was a reflection of his personality”
By Milton Pieters
GREAT BAY- The lives he impacted was reflected in the massive gathering that turned up at the Royal Funeral Home and Crematorium to bid farewell to the late Samuel Rueben Augustus Allen Jr. last Friday.
Governor Eugène Holiday accompanied by First Lady Marie-Louise, Prime Minister William Marlin and former Chairlady of Parliament Sarah Wescot-Williams , leader of the Hope party Mercedes van der Waals-Wyatt and leader of the Christian Party, Wycliffe Smith were among the many that filed passed the open casket bearing the earthly remains of Allen Jr.
Allen Jr. aka Venus, Sam, Sammy and PJ7SA West Indian Boy, was born on September 17, 1968 in Jamaica and died after a brief illness on October 1, in the Dominican Republic while he was receiving treatment.
Allen Jr, who began his career on radio at the tender age of 16, was known to possess the most eloquent voice and it did not take him very long to become a household name, both on and off the island.
As was expected, the order of service for Allen Jr. was lengthy. He leaves to mourn his wife Brenda Rodriguez de Allen, stepchildren, Brenedy Alejandra de La Cruz Rodriguez, Alejandro Rafael De La Cruz Rodriguez, brothers Evol and Errol, sister Lorna and mother-in-law Guelda Altagracia Regaldo.
In addition, to his close relatives and members of his extended family, Allen’s sudden departure also had a visible impact on the staff at Voice of St Maarten Radio Network PJD2 & PJD3 as well as other members in sections of the local media.
He was also a member of the Freemason Lodges Union 266 (St Maarten) Royal Arch and the Amicable St Johns 25 (Maryland US). That closely knit community will also miss his presence along with the members of the local cricketing fraternity.
Prime Minister William Marlin, was among the first to speak and from the tone of his voice, it was obvious that he too was affected by Allen Jr.’s passing. “I greet you today with a heavy heart, because this afternoon is not the best of times. But Samuel Allen Jr. has gone to meet his maker. It seems like only yesterday, when he called me and asked me on Election Day what time I will be casting my vote. He wanted to make sure that he captured that moment and have a few words with me. But little did I know then, it would have been the last time, I would have been privileged to be interviewed by him.”
The Prime Minister went onto describe Allen Jr. as a professional radio journalist to the core that did not like confrontations and mediocrity. “He never allowed his own personal views to get in the way of the news. He was not in the business of making the news. But presenting the news that was valid without editorials.”
According to the Prime Minister, St Maarten has lost a hard-working, dedicated, personable and decent media practitioner who smiled easily and laughed heartily. “Venus has impacted many lives, his voice was a reflection of his personality, calm and reassuring. Venus may not have been born here, but he was surely a son of this St Maarten soil and on behalf of the government, the Council of Ministers and my family, we would like to convey our deepest sympathy to his widow Brenda and his colleagues at PJD2 Radio; may his soul rest in peace.”
His passing was not easy for his widow Brenda who sobbed even when she was being consoled by the sympathizers after they had viewed the body. The outpouring of sentiments by the numerous speakers only added to the effect.
Before the start of the funeral service was the opportunity for those who wanted to get a look before the family members got their final chance. No one knew what was going through the mind of his widow Brenda  as she stood a few inches from her dead husband while placing her hands on his shoulder.
At the conclusion of the service, the casket was removed to the waiting hearse for a final trip in Cayhill where the family resided. After a brief stop, the procession which was led by a police on motorcycle proceeded over Link One and onto Front Street en route to his place of work at PJD2 Radio on Back Street.
While there, even persons that did not know Brenda personally took the opportunity to offer her their condolences. A short distance away , the back door of the hearse was open to allow those present to get a glimpse of the casket.
To add a solemn tone to the atmosphere, three members of staff from PJD2 Radio were locked in arms while standing in silence beneath the archway leading to the entrance of the radio station.
After the procession returned to the Funeral Home the members of the family gathered for the private cremation. In essence, that was the life of Samuel Allen Jr. – the HAM operator, radio host, pilot, boat captain and cricketer and more importantly, a masonic brother.