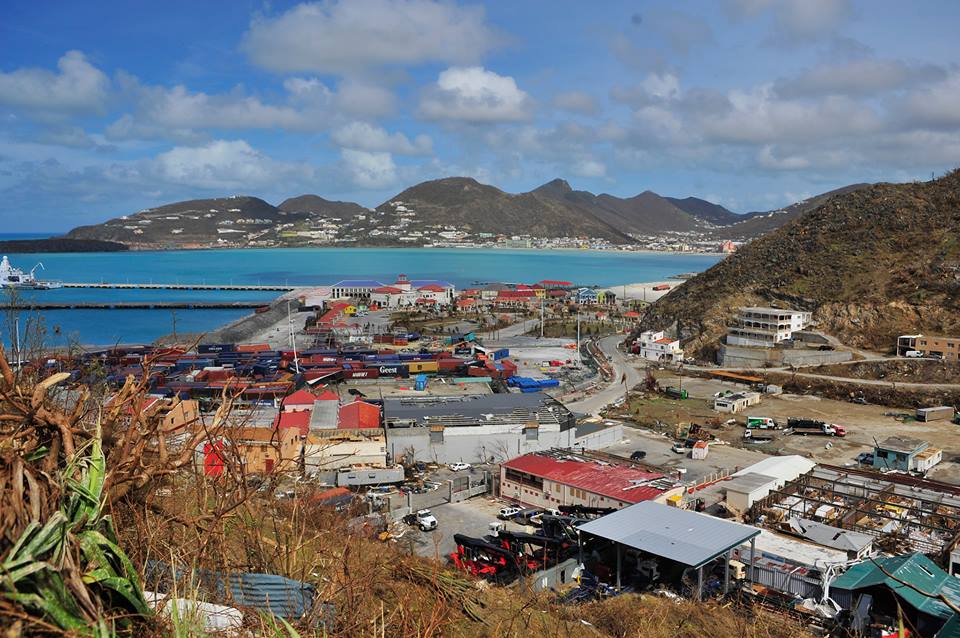 WILLEMSTAD/PHILIPSBURG – Hurricane Irma, a hurricane of the heaviest category (5), raged over St. Maarten on Wednesday. The damage is so extensive. So far one death has been confirmed as a result of the hurricane. Four deaths have been reported on the French side of the island. Eveline Henriquez-Dijkhoffz got caught in the middle of it and describes the damage. “Our roof is still on, but the damage around us is huge.”

Eveline decided at the last moment to remain at home in Point Blanche with her husband and two sons of 14 and 7 years. However under the house, in a hallway near the garage that is shielded with concrete. “That was a wise decision, we were safe there. It is not easy to describe how it feels to go through a hurricane. It’s just like a fast train rushing past.”

As the eye of Irma lingered over St. Maarten, Eveline and her husband quickly fixed some improvised hurricane shields on their home. “The eye came over St. Maarten faster than originally reported. Within in 15 minutes we had to fly back inside.”

Eveline and her family have a cistern, so they can provide water for themselves, but from her house she can see that a large water tank that many residents rely on has collapsed. “Everything seems wiped away. This will take months; the infrastructure seems to be completely destroyed.”

Communication with St. Maarten is going to be difficult. There is no electricity and most residents have no internet access, causing much anxiety from family and friends abroad. The airport and the harbor are not accessible, so the military and marines are trying to fly in via helicopter.

“I’ve seen telephone poles and wires on the ground, there is no way to work around this”, says Eveline. Also she has not seen the military teams, only the coast guard at a distance. “I was expecting to see more of the military in our neighborhood because there is a barrack nearby.”

She hopes that the defense can quickly resolve the communication problem. “In previous storms and hurricanes there was always a radio station able to broadcast which helped calm persons that were terrified. But this time radio silence came quick and still remains silent.

Meanwhile, the second hurricane is making its way to the islands: Hurricane José seems to be a category 2 hurricane and also has St. Maarten on its route. “We have a safe haven to hide, but I do not know if our house will survive, even if it is a category 2. And I cannot get updates on José’s progress because there is no radio station broadcasts.”

From her house she sees that the harbor is badly damaged and there is a transmission tower against a mountain. “Maybe it will take weeks before everything is back in the air. I will hold my heart.”