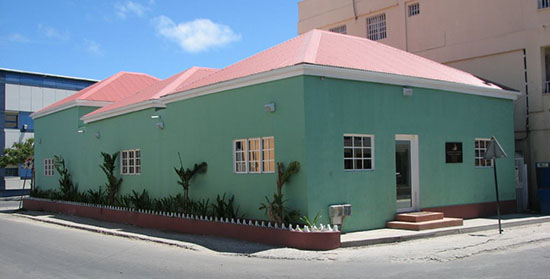 By Hilbert Haar
GREAT BAY – The Cadastre office has struggled in the past with incompetent employees and notorious troublemakers, it appears from internal correspondence this newspaper has in its possession. But some of the troublemakers of the past are now part of the Cadastre’s management team.
Remarkably, there are no locals in the current management team. Franklin Ch. is from Statia, Robert B. from the Netherlands and Marcia P. is from St. Lucia-Anguilla descent.
The Cadastre appointed one employee, identified as Austin Ph. in 2011 as a surveyor, after having worked as an assistant before. But in the course of 2012 it became clear “that the surveyors did not have geodetic training. This surfaced through the incomprehension of elementary geodetic principles that were discussed during meetings to clarify adjustments in the geodetic procedures,” a letter (dated April 8, 2013) from then director Clemens Roos to Austin Ph. States. “This lack of geodetic basis means that you are doing surveyors work for which you do not have the required qualifications.”
The Cadastre organized courses to get its unqualified surveyors up to speed but in the case of Austin Ph. This was to no avail. He completed the first module after a resit (meaning that he failed the first time) with a score of 6.0 on a scale of 1 to 10. But on the second module, Austin Ph, fell way short of a satisfactory score. First he scored 2.2. In a meeting with management the employee complained about the trainer. A meeting was set up to straighten things out and during a resit, the employee scored just 1.1.
Management gave the employee a third chance; first by organizing meetings to train in the subject matter, but the employee did not do well at all: “I noticed that you were copying and did not have a lot to contribute,” the director wrote to Austin Ph.”
In spite of the training, the employee also failed the third test with a measly score of 1.6. This was reason enough for the management to relieve him of his duties as a surveyor. He was transferred to the registration department, taken off the geodetic course and asked to return all the course material.
But immediately after Director Roos left under tumultuous circumstances, Austin Ph. was put back to work as a surveyor, with all the risks that this brings with it.
A second employee, Robert B., was called on his performance as a surveyor in early 2011, mainly because his time spent in the field as a surveyor and his production of certificates of admeasurement was “below the minimal expectation.”
When he was called on his performance (that included a host of other complaints), Robert B. “did not look for the reasons and options to improve, but attempted to bring in excuses for his performance.” The reason the surveyor ultimately gave for his poor field performance was that he was unable to operate a new instrument.
“You were used to function as a rod man while your assistant operated the instrument and thus doing your job,” the letter states.
Management made clear to the employee that he is the one that is supposed to operate the instrument. The new piece of equipment was put to work a year earlier. Asked why he was unable to operate it, the employee told management that this was not necessary, because his assistant was doing it. The man simply denied any responsibility for learning how to operate the equipment.
Instead of doing the job he was hired for, this employee filled his hours with processing deeds in the Kadsys registration system. Furthermore, he made doctor’s visits for his family during working hours, refrained from helping customers at the counter and spent time on the internet during working hours that was not accounted for.
The Cadastre relieved the employee of all his administrative duties and fully assigned him to the survey department where he would execute applications in the field. He was also ordered to report intended doctor’s visits to the head of the department.
Robert B. is also responsible for providing attorney Cor Merx without permission from his superiors with a report about the Caravanserai Resort. Management gave B. “a serious warning” for this action that contributed to the conviction of the Cadastre in the Caravanserai debacle.
Another glitch in the organization was the appointment on Franklin Ch. As the head of the survey department in 2009; that was no success because a little bit more than a year later, he asked to be relieved of the position.
Franklin Ch. has according to our sources “a reputation of misbehavior that goes back to the time when Nilda Arduin was the chair of the supervisory board. “He railed against the appointment of Erik Schalkwijk as director and had to be called to order.
In April 2011, he was called on numbering errors in the applications for certificates of admeasurement that caused “serious problems with clients.” Franklin Ch. told management he could not guarantee this would not happen again and failed to see a problem with the consequences of his mistakes.

And there is more. The acting guardian of the Cadastre system, Marcia P. is “constantly late and more
on the internet and her phone” than doing actual work. She is said to be the reason for conflicts within the organization that have resulted in the dismissal of two employees.
Marcia P.’s performance as the financial manager consistently fell short of expectations. Management found differences in the registration fees of several deeds and an astonishing difference of 125,000 guilders between the production of extracts for review by clients and the corresponding revenue. This difference came to light during an audit, while the accountant or the financial manager should have noticed this.
It also appears that Marcia P. followed a $10,000 online MBA course at the University of Liverpool at the expense of the Cadastre. Up to 2015, she had not paid a penny back. Marcia P. has a good relationship with Vromi-Minister Angel Meyers, who recently announced the installment of new members to the Cadastre’s supervisory board.
“Because of her relationship with Meyers and the supervisory board that has been installed it seems unlikely that she will pay this back,” a source told this newspaper.
This newspaper approached former Cadastre Director Clemens Roos to review this article. Roos declined to comment but confirmed that the content is accurate.
The supervisory board of the Cadastre is currently in the process of hiring an interim-director, but last time we spoke with the chairman of the board, Louis Castrell Gumbs, he said that the procedure was not finished yet.
Photo above caption: The Cadastre building on Back Street. Photo contributed
Photo Christopher Emanuel: In August of last year MP Christophe Emmanuel campaigned for the appointment of Marcia Peterson-Richardson as the new director of the Cadastre. The candidate lacks however the required formal qualifications for the job. File photo Today / Hilbert Haar