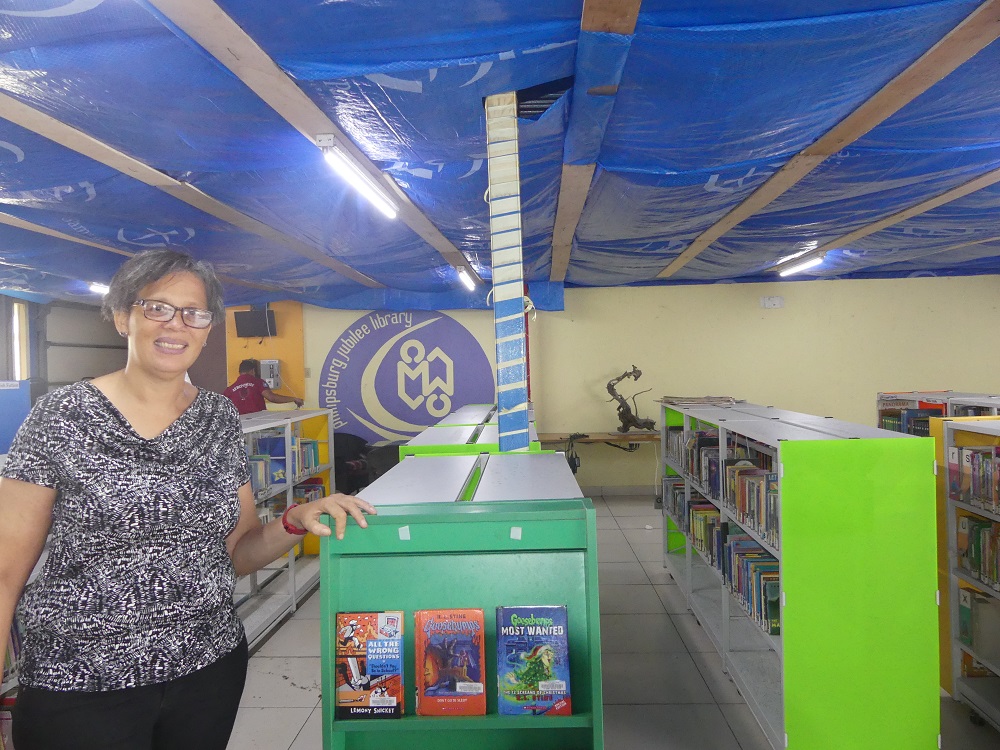 GREAT BAY – The Philipsburg Jubilee Library is history in its current form. Hurricane Irma dealt the building at the Voges Street a deadly blow on September 6. “The roof was already in a bad condition for a long time,” says Library-Director Monique Alberts. “We had planned to repair it one last time, but experts say that it is now useless to put money into renovating the building. My office is gone as well.”

The library is a private foundation that receives 1.2 million guilders in subsidy from the Ministry of Education, Culture, Youth and Sport. “That money covers the salaries and the books,” Alberts says. “For special projects we access other sources. The Media Lab was sponsored by the Foresee foundation, the Mobile Library by Amfo (the Antillean co-financing organization) and the small bus that we still have by Usona (the foundation for the development of the Netherlands Antilles).”

In 2008 the library presented a plan for the construction of a multifunctional building that would not only have the library under its roof but also the museum and Simarc, the St. Maarten Archeological Center. While the reactions to the plan were very positive, it never became a reality.

“Now all this needs a speed boost,” Alberts says. “The museum and Simarc have indicated that they are interested in doing this together.”

Hurricane Irma caused damages too to the museum on Front Street and to the offices of Simarc in Madame Estate.

The library employs nine people and Alberts says that they are all still on the payroll. The staff is busy cleaning up and sorting out books. From the collection of 60,000 books the library had in stock before Hurricane Irma, 2,000 have been lost, while many other books are in a bad condition.

“Our building has never been a good environment for books,” the director notes. “But the current conditions – with the rain and the humidity – are worse.”

The library’s entrance hall is currently the place where most books have been parked, protected by a blue tarp that has been nailed to the ceiling. On Monday, a team was on the roof taking additional measures against leakages.

“Under these conditions we cannot open the library for the public,” Alberts says, adding that she nevertheless aims to reopen by the first of November. “We can use the entrance hall and maybe put a portable cabin in the parking lot.”

Hurricane Irma has not just damaged the building and part of its collection. Looters also took a shot at the place. They cleared out the media lab, stealing many laptops and other equipment. Alberts says that the library still gets unwanted visitors, because it is not possible to close the building properly.

But while right now everything looks bleak, the library is not going out of business. “We are insured through the insurance for government buildings at the department of Facility Management. Our claim will go to Nagico,” Alberts says.

Daphne Thomas, the acting head of the Culture department at the Ministry of Education, Culture Youth and Sport has visited the library. “I do not have an indication that they want to stop our subsidy because we do not have a building anymore,” Alberts says.

The director emphasizes that the library is more than a place that has a lot of books. “It is a meeting place,” she says. “Parkinson’s café, Down Syndrome Café, Toastmasters, churches and other non-profits used our meeting room. That brought in some money, though some organizations do not have to pay. Furthermore the library was the place for a program that supported citizens with literacy issues.”

Shortly after the passing of Hurricane Irma, Alberts left for the Netherlands for a family visit; she also used the opportunity to meet with librarians, like Yvonne Sinkeldam. “She works at the Rijnsburg Group, a conglomerate of libraries in the Netherlands. In the nineties she used to work here,” Alberts says. “She wants to start a fundraising action for our library. It is called Actie Boekenstorm and they will use a bank account of the royal Library in The Hague. The account number will be announced next week.”

That is not the only support for the library. The Rotary helped cleaning up in the first week after the hurricane, and SVOBE, the Foundation for secondary education, made office space available. Volunteers have helped sorting out books. Five youngsters with a sentence to community service to their name and two other volunteers have lent a hand.

The Bijlmerpark theater in Amsterdam Zuidoost hosts a fundraising evening on Wednesday (October 18). Ilse Godtschalk will present the premiere of her movie The Movietrader Reporters and the King of Morekistan at this event. The movie shows St. Maarten’s beautiful side (from before the hurricane). A DVD of the movie will be sold at €25 apiece and the funds will all go to support for the restoration of the media lab at the Jubilee Library in Philipsburg.

Photo caption: Library-director Monique Alberts in the only part of the library that still offers some protection to the books. Photo Hilbert Haar.

Fire at W.I.B. on Bush road