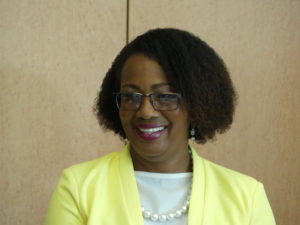 GREAT BAY – “The inflammatory, defamatory and libelous remarks made by Mr. Milo Pinckney, representative of USESOM NV which was declared bankrupt, IEMC LLC, IEMR LLC, IEMR N.V. dba AUIS, are very serious and an impediment to further discussions and negotiations with Government and specifically the Ministry Education, Culture, Youth and Sport,” Minister Silveria Jacobs stated in a reaction to today’s publication about the situation at the American University of Integrated Sciences (Today – February 22, Milo Pinckney: “we are ready to move to another island”). “While some facts are quoted in the statements made, many are left out thereby portraying the government in a very negative light in the statements made by Mr. Pinckney in the press.”

Minister Jacobs strikes back in AUIS-dispute
Mr. Pinckney’s very negative and disrespectful attitude towards civil servants and ministers has been well noted in meetings and he has been told on more than one occasion to provide proof of his allegations or to refrain from such slander, Jacobs stated. Instead, Mr. Pinckney chose to try the government in the court of public opinion with malicious and unsubstantiated statements.”

In a reaction to the minister’s statements, Milo Pinckney informed this newspaper as follows: “Her response evidences her well-documented contempt for accuracy. I have no connection with IEMC and her efforts to misdirect the discussion from her failure to learn the facts are consistent with the historical incompetence demonstrated by her and personnel in her office. We welcome a discussion with her, however all attempts have been met with silly delay tactics. As to evidence, we are more than willing to publish the historical communications with her office and allow the wise people of SXM to evaluate her frankness.”

Minister Jacobs says that she informed Pinckney in a letter she directed via her ministry’s legal representative to Pinckney’s lawyer on Monday February 13, 2017, that she is prepared to sit with him “provided that clarity can be obtained on all of the companies, shareholder changes and name changes Mr. Pinckney utilizes for the purposes he wishes to attain. Instead of providing clarity, Mr. Pinckney went to the press with his malicious and unfounded allegations.”

Neither the Minister of Education, Culture, Youth and Sport nor St. Maarten is in anyway obliged to sign any addendum or to cooperate with any agreement with the new company IEMR N.V. without full disclosure, Jacobs added. “The Minister of Education would like to inform the parents and students as well as the general public neither seeking information about the University, that although IEMR NV dba AUIS is eligible to conduct business on the island, AUIS is not an accredited university nor recognized on the island as is stated on its website.”

After consultation with legal affairs, a new agreement was drawn up which Mr. Pinckney has in his possession for feedback and further discussion, Jacobs stated. “However, he refuses to provide clarity in writing on how IEMR N.V. took over the operation of the University from USESOM N.V. The minister’s goal is to make certain that the medical school is at a level that it can be accredited; this requires a commitment by the school to apply and qualify for accreditation at an institution approved by government and subject itself to monitoring to be able to maintain accredited status.”

Lawyers for the ministry of education, culture, youth and sport and Pinckney have been in discussion since the last meeting held in 2016. “Mr. Pinckney has met with the representatives of the Department of Education, Legal Affairs and Minister Jacobs in early 2016. The minister deems the public behavior of Mr. Pinckney reprehensible and unacceptable.”