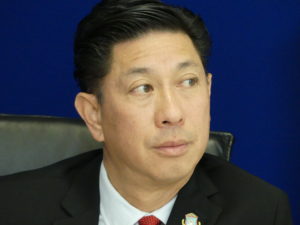 GREAT BAY – “Due to the recent court case filed by VAMED against SZV, the development of the new hospital and most importantly quality care close to home has been delayed. This does not mean that a new hospital will not be built. It will. St. Maarten needs a new hospital,” Minister Emil Lee (Public Health) stated at the Council of Ministers press briefing yesterday.
Based on the court ruling, SZV has appealed the case and is complying with the verdict. Minister Lee provided an elucidation of the ruling, identifying ‘why everyone is so careful with what they say, and why there is the so-called “radio silence” about the new hospital’.
“Within the court judgement, SZV is prohibited from directly or indirectly, signing an agreement with INSO, or an entity within INSO, with the aim to build the hospital, and prohibits SZV to comply with the already signed agreement, or to provide cooperation thereto, on a penalty of a fine of $1 million per offense, whereby the total fines that can be given is a maximum of $25 million. Therefore, everyone is very cautious and careful about what they say. However, this does not mean that work is not progressing in terms of the legal case and discussions about how we will improve the quality of health care are still ongoing,” stated Minister Lee.
To provide at least some sort of insight regarding the developments of the new hospital and to provide some level of comfort to the public and media, Minister Lee gave a brief explanation about the claim from VAMED that the price from INSO was too low. “I want the public to know that SZV is working diligently on the appeal so that we can see the new hospital become a reality, and all stakeholder including Government is supporting that appeal.”
“During the court case, VAMED presented two arguments to justify their claim that the price of INSO was too low. (1) They used a benchmark report from an American company that was commissioned by VAMED to justify the average construction cost per square meter, and (2) was a reference to construction cost per m2 as outlined by SMMC for the expansion plans in 2009.
VAMED argued that the construction price per m2 in 2009 is higher than the one from INSO. However, I am going to illustrate why it is very difficult to use the construction price for the expansion in 2009 in order to compare to INSO’s competitive proposal.
The new hospital and the 2009 expansion plans both proposed to construct 4 operating theatres. When constructing hospitals there are a number of hot floors and cold floors. An operating room is considered a hot floor as it is a room that requires technical, intricate construction details and material. Cold floors are very basic construction with walls, tiles, etc.
In the 2009 expansion, the price per construction was based on constructing all hot floors, whereas the new hospital included hot floors plus cold floors. In essence, the high cost of building an operating theatre is the most expensive square meter for the hospital. Therefore, when you divide that costs over the square meters, of course the average square meter price is a higher price. For example, if your building a house and you want a gourmet kitchen, if you only took the price per m2 for your gourmet kitchen, the price for construction would be higher than if you would calculate the price of your living room which would be merely walls and tiles.
In addition, the 2009 expansion they had planned to construct two floors, but they were only going to build the first floor in their expansion project. Therefore, the foundation and structure had to be stronger to support a two floor structure. Therefore that beefed up excavation and foundation is divided over a smaller square footage,” stated Minister Lee.
Minister Lee expressed that he is very comfortable that the price is not too high. From the beginning of the process Royal HaskoningDHV and ICE with local experience, who has extensive experience in building hospitals, was hired as an engineering consultant throughout the whole process. A budget was formulated to illustrate how much should the new hospital cost. These numbers were carefully calculated to provide a benchmark figure for the evaluation of the bids received.
“When you try to do everything right in an open and transparent bidding process, it is kind of surprising to me that this is where we end up; but it is what it is. In the end all parties, SMMC, Government, and SZV all have an incentive for the hospital to be built. Namely: to reduce health care costs, to improve quality of service, to provide care locally, and to provide a professional working environment for the staff of SMMC with modern equipment. While we all want and need a new hospital, the possibility of making this reality is currently being held hostage for financial personal interests.”
Minister Lee called on the media to not only seek information from our local entities but to perhaps hear from VAMED what their intentions are in terms of moving forward. “Is it there intention to pursue the long legal battle at the expense of improved health care for the people of the country?”