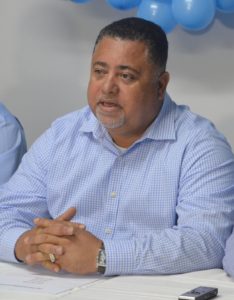 Dutch newspapers about Checkmate investigation:
“O’Neal A. childhood friend of USp-leader Richardson”
GREAT BAY – The arrest of Checkmate Director O’Neal A. was also news for the Dutch newspapers Trouw and de Telegraaf. Under the headline: “Head security port St. Maarten arrested’ the papers reported that “the 35-year-old owner of Checkmate Security has been arrested. He provides the security of the port authority in St. Maarten and is suspected of tax fraud, forgery and money laundering.”
The investigation against O’Neal A. is “part of an intensive approach of border-crossing corruption and fraud in St, Maarten” with support from the Netherlands, the papers write.
They also note that earlier this year employees of Checkmate were involved in a drug deal that went wrong.
Remarkably, the two papers write that O’Neal is “a childhood friend of Frans Richardson, leader of the United St. Maarten party that is going to be part of a new coalition.”
The report continues with this observation: “Media on the island think that the arrest can have far-reaching consequences for the relationship between politics, the private sector and the underworld on the island. These hidden relationships are according to the Netherlands a serious threat to the safety and the economy of the countries in the Caribbean part of the kingdom.”
When the parliament debated the new contract between the port and Checkmate in May of last year, MP Frans Richardson criticized the attempts “to link him to Checkmate Security.” Attempts by the parliament to have Minister Connor reveal the identity of the shareholders of the company failed. Private companies are not under any legal obligation to make the names of their shareholders public.
Richardson said at the time that Checkmate’s owner as a local businessman was being dragged through the mud “because he is trying to do business in St. Maarten.”
Richardson also dismissed criticism of the fee the port paid on the new contract per hour for the Checkmate Security guards; reportedly, the price went up in the new contract from $6.75 to $10.30 per hour.
Instead of criticizing this increase of 52.5 percent, Richardson expressed his satisfaction that locals now received “a livable wage” from the company. The new rate represents a monthly salary of $1,785 for the security guards.
Richardson was not the only one attempting to protect Checkmate during this debate in parliament. MP Silvio Matser, currently an MP for Richardson’s party, commended the company’s director for hiring locals and said that he would not support “anyone who is hell bent on destroying locals.”
Matser has been convicted for tax fraud and he is currently a suspect in an investigation into election fraud in 2014.
In a report in the Volkskrant, reporter Charlotte Huisman writes that the Checkmate-director supposedly donated money to a politician to buy votes. ‘Sources’ told Huisman that this politician won “more votes than expected’ during the September 26 elections.
This hint can only point to Chanel Brownbill, a candidate for Frans Richardson’s United St. Maarten party. In 2014 Brownbill won 94 votes as a candidate for Theo Heyliger’s United People’s party, but in September he shot up in the rankings with 424 votes, making him the number two vote getter for the USp, just behind Richardson who won 502 votes. Before the elections, Brownbill was completely unknown in the political arena.