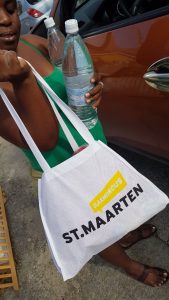 SXM AIRPORT — Over 300,000 (Three Hundred thousand) pounds of hurricane relief supplies were secured and delivered by Ministry TEATT Team Relief SXM in the days following Hurricane Irma. The team, which consisted of several volunteers, was quickly formed once commercial airlines was cleared by Minister of Tourism Mellissa Arrindell-Doncher to fly into St. Maarten to perform humanitarian airlift.

The commercial airline that brought the most supplies into St. Maarten for Team Relief was Pawa Dominicana

Caribbean Airlines, Air Anguilla, Tradewinds Aviation, Seaborne Airlines, Windward Express, Wingo Colombia, Miami Air, Blue City Holding and private charters also brought supplies to the island. Head of the St. Maarten Tourism Bureau Rolando Brison coordinated most of the flights and expressed appreciation to the management of these airlines for their assistance of St. Maarten in its time of need.

While much of the airlines brought in supplies from the US and Dominican Republic, tens of thousands of pounds were also brought in by commuter airlines from other island in the region, including St. Lucia, St. Kitts and Nevis, St. Vincent, Curacao and Puerto Rico. “The Caribbean Tourism Organization and the various tourism directors of the board of CTO were my first goto option to seek relief, and they all answered the call to support in one way or the other; we could not have done it without them” said Brison.

Added CEO of Pawa Dominicana Gary Stone: “Our commitment as an airline goes far beyond moving passengers from one destination to the next. We have humbly taken the responsibility of bringing much needed assistance to the people especially of the broad community of St. Maarten in which PAWA Dominicana has a presence during our normal operations. This is purely a humanitarian effort, one that we decided to undertake despite the Princess Juliana International Airport has not started commercial operations as yet, ” said Gary Stone, President and CEO of the airline.

Chief of Staff for the Minister of Tourism Cecil Nicholas spearheaded the call to many local bus drivers, taxi drivers and truckers to move the supplies from the airport and into the districts. Nicholas explained that Team Relief employed a policy of moving the relief supplies “from the airplane directly into the districts”. Furthermore, the team created the hashtag #teamreliefsxm for users of social media to indicate where and who needed assistance. That hashtag was used more than 5,000 times on social media.

Elvis Queeley, one of the truck drivers that transported the supplies added: “”When we got the call to help not one of us hesitated. I for one with the little gas I had in my truck drove down to the airport and started loading. We had people in our Whatsapp group telling us exactly where the places of need were based on the hashtags they were reading, so we just had to load, drive and hand out. A great effort overall, dozens of volunteers, and thousands of lives touched.”

“We wasted little time in doing what we had to in ensuring that our airline partners not only moved people out of St. Maarten, but brought much needed supplies as well. Both St. Maarten and the airlines enjoy great partnerships when times are good. The airlines were more than willing to give back and do their part by organizing relief movements on their end. We are grateful for their effort and that of all of the volunteers of TEATT Team Relief SXM,” Brison said.

It should be noted that the amounts mentioned does not include the supplies brought to the island by the military and KLM, but solely indicates what was delivered by the commercial airlines that TEATT organized.