Home Local News Plasterk about Dutch assistance: “We are not just going to open a... 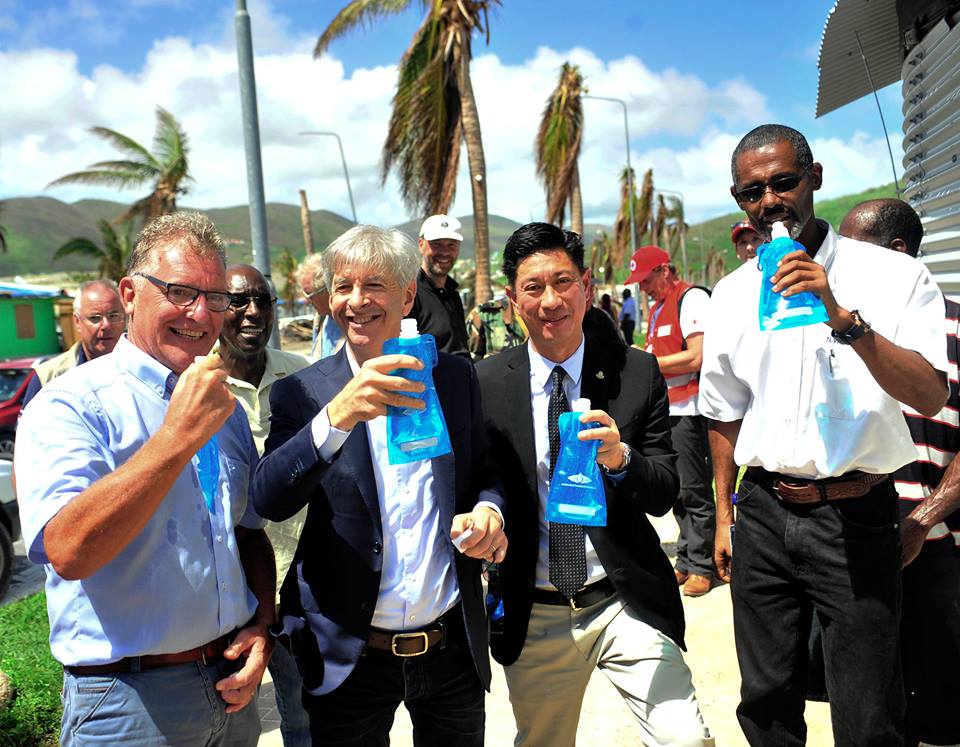 Plasterk inspected the installation and at the end of the mini-tour enjoyed a sip of the fresh drinking water the facility produces.

“When I was here two weeks ago we drove through Middle Region and people shouted to us: water water, drinking water. It is crucial for people to have healthy and enough drinking water. I am glad it is provided here,” Minister Plasterk told journalists.

Plasterk, who replaced his embattled colleague, defense Minister Jeanine Hennis, said that he had not just traveled to St. Maarten to witness the arrival of the Karel Doorman, but also to take a closer look at the island’s future. He was impressed with the progress that has been made since September 6th.

“I was here four weeks ago before the hurricane when everything was hunky-dory and I was here two weeks ago right after the hurricane,” Plasterk said. “You can see two things. A lot of the immediate damage has been cleaned up. You see garbage piles where everything has been collected – taken out of the neighborhoods, which is good. And you see the huge damage which will take months and years to build back.

“I am here to witness the arrival of the Karel Doorman which is full of material to help rebuild St. Maarten, but also to look at the future and see, within the kingdom we can all work together to rebuild a better St. Maarten for the people.”

Plasterk declined to put his finger on how far the Dutch assistance to St. Maarten will go: That is not a single moment decision. It is a process to get a picture of what is needed to build back a better St. Maarten. We need to assess what the damage is; there is also the issue of what the insurance companies will do to help and I’m sure we also need a plan for not just building it back the way it was, but look at the future and improving while building.

“My people will have to discuss the conditions under which the Netherlands will provide a hurricane fund to support the rebuilding activities.”

Plasterk furthermore said that his ministry is looking at the legal format of the help – with or without a High Commissioner from the Netherlands to supervise the process. One thing is clear: rebuilding St. Maarten cannot be done without aid. We need to participate. It is also very clear that we are not just going to open a bank account. We have to make sure that all the money ends up in the right place and that we rebuild a proper St. Maarten.”

Lastly, Plasterk was unable to put a number on the total damages Hurricane Irma has inflicted on St. Maarten. The central bank mentioned $2,5 billion some weeks ago and Prime Minister William Marlin put the material damages at $1 billion.

“It is not wise to give an amount now,” Plasterk said. “We’re right in the middle of assessing what the actual damage is. Doing that now would be too early.”