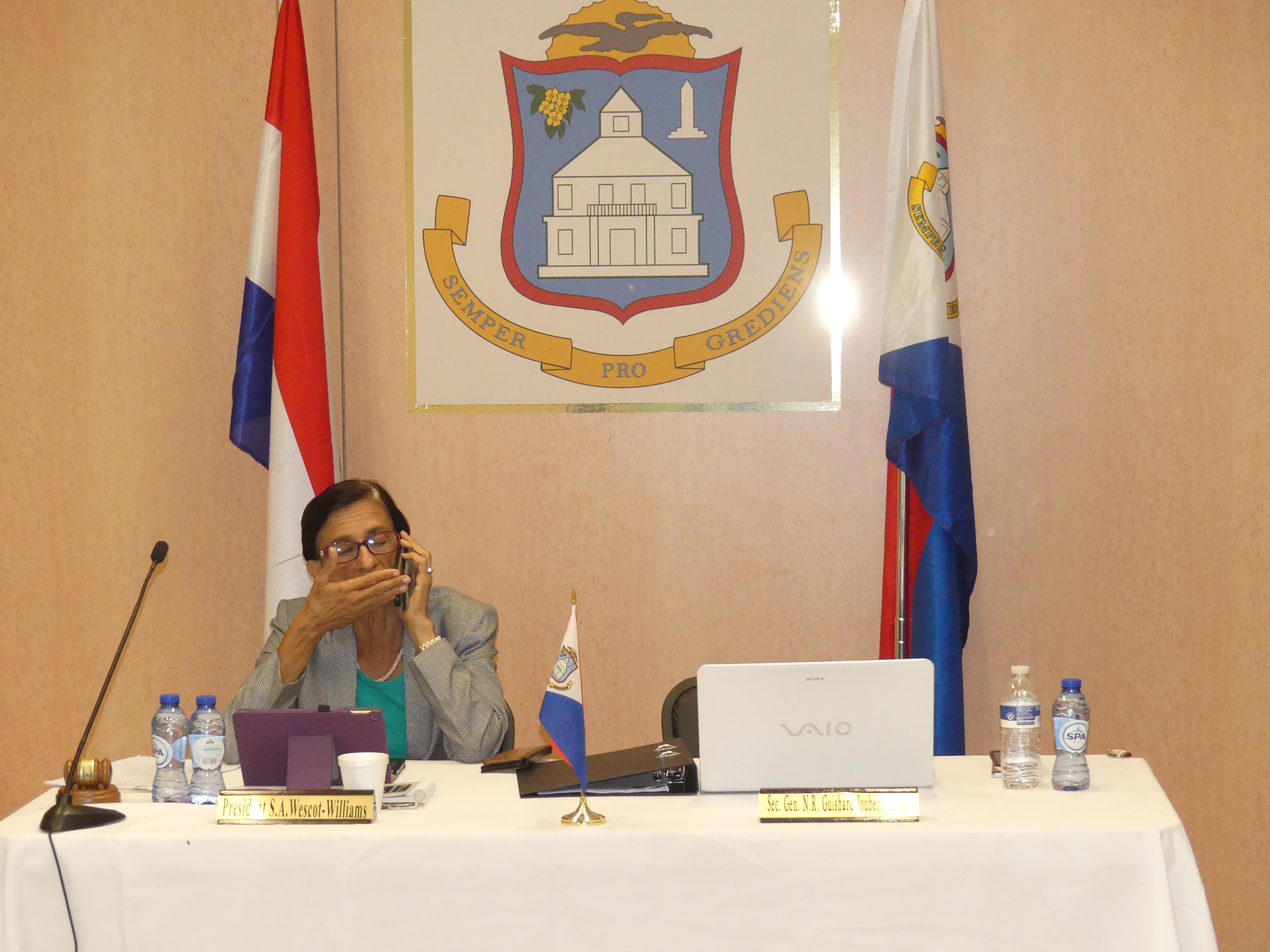 GREAT BAY – The preliminary estimate of the material damages Hurricane Irma has inflicted on St. Maarten is in the region of $1 billion, Prime Minister William Marlin said on Monday  during the first meeting of parliament in the 2017-2019 parliamentary year.

Parliament met in a meeting room on the first floor of the government administration building on Pond Island because the parliament building in town is currently not available due to damages it sustained during the hurricane.

PM Marlin said that the current official death toll for the Dutch side stands at two. “Two bodies were found floating in the water in an advanced state of decomposition. They have not been identified yet.”

The prime minister covered hurricane preparedness, the aftermath and the recovery plans in his presentation, but he opened his remarks with criticizing something he had warned about before Hurricane Irma devastated the island: fake news. “Some people have misused the situation to launch fake information, creating more damage than good. There was criticism right left and center rather than coming together to see how they could help. That was totally unnecessary.”

PM Marlin gave a concise overview of hurricane preparation – from the formation of the disaster management team a few years ago, the publication of a booklet about procedures that are in place to tackle the threat of a hurricane, the annual awareness campaign that begins well before the start of the hurricane season and the annual Hurex exercise.

Irma developed at the end of August and it was initially expected to pass well north of St. Maarten; but by September 4 it was clear that the hurricane was going to hit the island. During the final preparations on September 5 schools were closed, supermarkets were ordered to close down at 3 p.m. and the curfew, first put in place for 8 p.m. was moved up to 6 p.m.

The country requested military assistance on September 1 and 3. “Reinforcements arrived before Irma, tasked with maintaining public order and managing the shelters. Five of them were opened on September 5 at 5 p.m. About one hundred people made use of it.”

On September 8, the government declared the state of emergency for a period of two weeks; on September 21, it was extended until October 6.

Here are some of the factual data the prime minister presented.

There are still 560 military personnel on the island.

28 Police officers lost their homes but many of them still reported for duty and worked around the clock.

Some of the civil servants who remained on the job slept in the government building because they had no house to return to.

96 Dialysis patients were evacuated to Bonaire and from there to Colombia where they are currently still receiving treatment. The dialysis center at the St. Maarten Medical Center did not have the required clean water and accompanied pressure to make responsible dialysis possible.

300 Students from St. Maarten reported for school in Curacao and Aruba.

Gebe is working hard to reconnect the schools to electricity and water.

Some teachers have left the island, posing an additional challenge for the education system.

The preliminary assessment of material damages of $1 billion does not include economic damage. UN-experts delivered a first report about the economic impact on Monday to the government.

Storage for water distribution is below 50 percent.

Damage to the power plant is limited but overhead distribution lines have been hit.

One third of the pharmacies on the island have been damaged, including the one at the hospital. The emergency room also suffered damages and the lab at the SMMC cannot be used.

The courthouse and the prosecutor’s office cannot be used at this time.

50 Percent of the storage capacity at fuel supplier Sol has been damaged.

95 Percent of all homes have been damaged and 40 percent are no longer fit to live in.

Only three hotels are still operational and 80 percent of the room inventory is out of service.

The impact on the economy will be severe and government revenue will go down.

The tourism season will start in November, but the island will lose a great deal of the season.

The Netherlands provides two reverse osmosis installations that will produce clear potable water; they will be installed at the Festival Village and in Belvedere.

PM Marlin also announced a slogan: St. Maarten is back in November 2017 but it will be stronger and better in December 2018.

The prime minister furthermore said that the government is hell-bent on getting rid of the island’s shanty towns and that it is looking at ways to prevent that the hundreds of (expected) unemployed citizens will fall by the wayside.

In the afternoon members of parliament added their two cents, sharing their experiences and – at times, venting their frustrations.