Home StMaartenNews PM Marlin: “This is not going in the right direction” 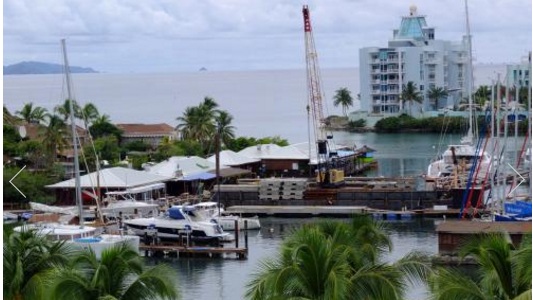 GREAT BAY – “This is not heading in the right direction,” Prime Minister William Marlin said yesterday afternoon when he explained the situation surrounding the border dispute with the French side in Oyster pond. “This morning I received a hard copy of a letter from Préfète Déléguée Anne Labies basically saying what she told me on the phone, namely that the French consider the northern part of Oyster Pond to be French and that the work at Captain Oliver’s was carried out illegally.”
Oyster Pond border dispute escalates
“What to do?” the prime minister continued. “If we remove the barricades at the property, the French will probably be back at night to put them back in place. Before you know it we have a huge brawl on our hands. But should we sit back?”
The PM said that the Ministry of Foreign Affairs has been in touch with its French counterpart and that Paris in turn had contacted the Collectivité in Marigot for more information. “They are now preparing a meeting between The Hague and Paris to discuss the situation. The thing is, we’ve had these discussions in the past.”
Marlin was visibly displeased with the actions of the French authorities. On October 26, a team of around 25 gendarmes descended on Captain Oliver’s Restaurant, arrested the owners and three workers and held them for more than eight hours.
“The repairs Captain Oliver’s was doing on the dock were deemed illegal by the French authorities; the barge in the pond was barricaded and parts were taken away to make it inoperable. They asked the owner of the barge to move the vessel to Dutch waters but he refused to do so, saying he was already in Dutch waters.”
Marlin continued saying that the company had all the permits it needed from the authorities in St. Maarten. Captain Oliver’s also obtained the water rights from the Dutch side. “This is not something that started yesterday,” the PM said.
“This is a display of might over right and it is not the way neighbors who have been living peacefully together on our island should deal with each other. This is not a fight between the people of St. Maarten and Saint Martin. This fight was started by the French authorities.”
Looking at Captain Oliver’s history, Marlin noted that the late Captain Oliver had bought land on the French side and when he requested the water rights to create his marina, the French authorities at the time sent him to the Dutch side – thereby acknowledging that the water in Oyster Pond is Dutch territory.
“Now the French are trying to muscle in to get a piece of the action in Oyster Pond. They call on treaties that say the water border between countries runs dead in the middle. They claim the northern part of Oyster Pond, but the 37 square miles of our island have never been evenly divided; the French got more and they own more than half of the Simpson Bay Lagoon.”
Marlin referred to a quadripartite meeting (between the governments of the Netherlands, France, St. Maarten and Saint Martin) of October 2014 where parties decided to maintain the status quo in Oyster Pond until the border dispute has been settled. The status quo is that the water of Oyster Pond is Dutch St. Maarten’s territory.
Before the meeting started there was some discussion about the way it had been convened and about the prime minister’s request to hold a closed door meeting, given the sensitivity of the information he intended to provide to the Members of Parliament. In the end the decision fell in favor of a public meeting, causing the PM to withhold certain information that cannot be made public.
MPs had several questions that PM Marlin will answer tomorrow in the continuation of the meeting that will begin at 2 p.m. Marlin had to leave shortly before 4 p.m. yesterday for a meeting in his role as formateur with Governor Holiday and with the National Security Service VDSM.
Photo above caption: The situation at Captain Oliver’s in Oyster Pond. Photo soualigapost.com