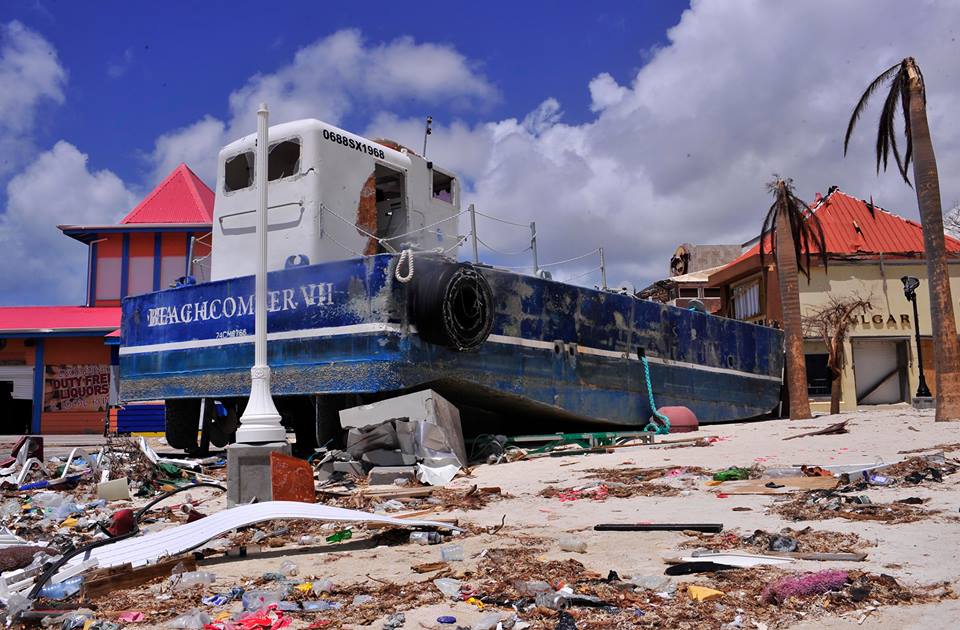 Great Bay — Almost anyone or any group of people can remove excess waste that washed up along the shoreline in Philipsburg, but removing a 75-ton pontoon, that washed up on to the boardwalk, requires a special group of persons who are experienced in that particular field.

Sometime during the early hours of Wednesday, September 6th, a pontoon, property of Bobby’s Marina miraculously made its way across the Boardwalk. Had it not been for the BVLGARI Jewel Store which was directly in its path, it could have ended up elsewhere with the possibility of causing more structural damages. (See photo above)

Naturally, the presence of such a huge vessel soon became an attraction and what is ironic was that it narrowly missed a sign saying ‘Tow Away Zone’ on the right side of the bow by a few inches. (see photo below)

However according to Bobby Keough, owner of ‘Seatrack & Snorkel Safari, the company that was hired by the owner to remove the pontoon, it should be gone by Sunday. “Bobby [Velasquez of Bobby’s Marina – ed.] is a friend of mine, but he has a lot on his plate right now and because of my experience, he asked me,” Keough said.

He admitted that there is a degree of difficulty in the removal procedure, but because of its present position, it will be elementary. “We have to do it slow and lift it and get everything done the way it should be done.” Keough explained, adding that “It is a big job, but it’s not insurmountable”.

So far, two 50-ton jacks with the aid of solid wooden bars have been used to elevate the pontoon from its original position. (See photo below). The next phase of the operation will be the placing of steel rollers and after which the pontoon will be coupled to a huge tug which will proceed to drag it back into the water.

With a smile on his face he said, “Imagine what would have happened if it had turned a bit more to the right, I mean that thing weighs 75 tonnes, we would have had a conclusion like Speed 2, into the Court House,” he pointed out.

However after this pontoon, his work will not be over, he still has one partially submerged pontoon to work on and a boat in the vicinity of the Walter Plantz Square. Keough is no stranger to the island, he has been living here for the past 22 years.