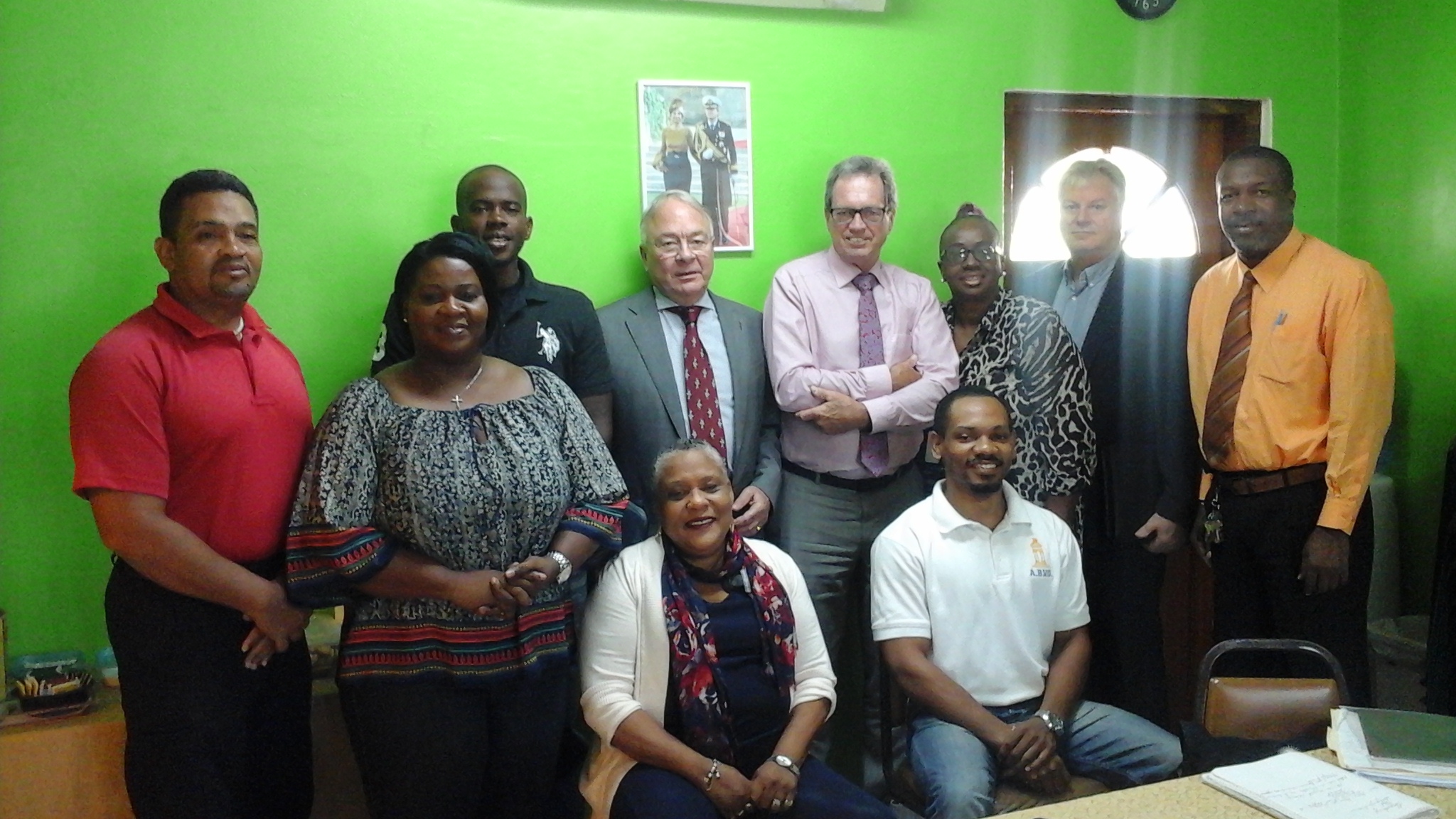 GREAT BAY – The Progress Committee St. Maarten was in St. Maarten last week for the usual quarterly meetings with the director of the Pointe Blanche prison Edward Rohan and with the management of the police force to discuss the status of the plans of approach and the progress reports these entities are required by Kingdom law to submit.
On Monday, the committee met with the Dutch representative in Philipsburg, Chris Johnson. After that the committee met with Prime Minister, William Marlin, in his new office. The committee took the opportunity to remind the Prime Minister that the committee is still lacking a member for St. Maarten as the previous representative of St. Maarten on the committee, Mr. Richard Gibson, resigned in 2014 to take up the post of minister of finance and there has been a vacancy ever since. The Progress Committee finds it imperative that a member for St. Maarten be appointed post haste. Other topics the Progress Committee discussed with the Prime Minister are the safety at the Pointe Blanche prison, the developments at the police force and putting the completion of the plans of approach on the agenda of the Council of Ministers as soon as the latter is appointed.
Later in the afternoon, the Progress Committee sat in on a joint meeting at the Philipsburg Courthouse with the members of the Prison Oversight Committee chaired by Judge Mauritsz de Kort, and members of the Council on Law Enforcement to discuss the mutual topics that concerned all three entities where the prison safety and security of the inmates are concerned. The recent murder of inmate Omar Jones at the Pointe Blanche prison and the safety concerns of the inmates, prison guards and staff are high on the concern lists of these organizations.
The committee members met with Franklin Richards, the chairman of the Law Enforcement Council at an informal venue the next day, as he was unable to attend the joint meeting on Monday.
On Thursday, the committee had working visits with Chief Prosecutor Ton Maan, outgoing Minister of Justice Edson Kirindongo and with the temporary head of the Immigration and Naturalization Department, Richard Panneflek. A courtesy visit was also paid to the Vice-chair of the Council of Advice, Mavis Brooks-Salmon.
On Friday, the committee paid a courtesy visit to Governor Holiday at his cabinet and to the new President of Parliament Claret Connor. The committee was pleased with the positive reception received from the President of Parliament and the committee looks forward to establishing a working relationship with the appropriate committees in Parliament handling the topics of general affairs, justice and law enforcement.
Both the President of Parliament and chairman Nico Schoof of the Progress Committee agreed to work on a plan to give a presentation to the members of parliament during the next round of committee visits scheduled for the week starting the end of January 2017.
Progress Committee chairman Nico Schoof said “The biggest concern of the committee is the lack of a sense of urgency on the political level in St. Maarten.” The committee made it a point to bring this across to both the Prime Minister and President of Parliament during the meetings held. “The committee has also actively sought support in the Netherlands from Minister of Kingdom Relations Ronald Plasterk and from the subcommittee for Kingdom Affairs in the Second Chamber to take a pro-active approach to assisting because the task is simply too big for St. Maarten alone.”
Unions: “Everyone knows what the problem is, but no one does anything about it.”
The highlight of the week for the committee was the meeting with the union leaders of all three major unions representing the workers and staff of the Pointe Blanche prison and the police force who are members of these unions. The Progress Committee met with the prison union WICSU-PSU and with the police unions ABVO and NAPB on Friday morning at the WICSU headquarters in Philipsburg. The union leaders present at this meeting were Julia Solognier and Belinda Bryson of the WICSU-PSU; Janine Philips on behalf of the NAPB; and Sharlon Cathalina and Urvin Sjen-Liep-Shu of the ABVO. The main topics of discussions were the security and safety at the prison, the issues relating to the police staff and the unapproved function book that has not been finalized since 10-10-10 for the workers and staff of the police force, Pointe Blanche prison and the National Detective Agency.
“Everyone knows what the problem is, but no one talks about it.” was the general consensus amongst all the union leaders expressed by Sharlon Cathalina at the end of the meeting. The committee hopes to have a more in-depth follow-up discussion in 2017 with the unions as St. Maarten would have a council of ministers by then and more will be known about the function book’s approval process and the required funding for the implementation thereof.
Concluding the week with an internal review of their findings, it was obvious to the members of the Progress Committee that security is the major concern of all the stakeholders in the justice chain and that this should be pointed out in the next committee report.
Photo above caption: The Progress Committee met with the three unions, WICSU, ABVO and NAPB last Friday to discuss matters concerning the prison and police force. Photo contributed