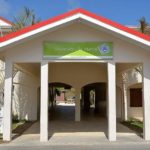 POND ISLAND — “USM cannot close” says Rhoda Arrindell, former teacher at the University of St. Maarten (USM), as the students and teachers respond to the closing of their school in an uproar last night at the student meeting in the university. “We are going to fight,” shouts a student in the crowd as the rest joins in agreement – not giving up on the school they’ve grown to love – without a battle. And as some become angry, many remain confused to what will happen to their future.

According to a young student, age 17, she had nowhere to go and cannot benefit in a lot of things from government – such as a scholarship to another school off-island – because of her lack of Dutch citizenship. She says that her only option was USM, but now she that it might be closing, she has no idea what she is going to do anymore. Another student who feels the same frustration stood up and stated that she has been crying her eyes out the whole evening, and says that she’s hearing a lot about the business students but nothing about the future educators. She says she wants to become a teacher but doesn’t know how she will be able to do so without the guide of the university. And as she expresses her heartbreak, the same pain can be seen on the faces of the other students and teachers as they mumble their frustrations to each other.

People also felt betrayed and believe that the only reason they’re hearing this news now is because of Irma, however they are ready to do anything it takes to raise enough funds to keep the school going. “Although education may not be the priority for government, it shouldn’t be up to the government or businesses to keep the school going.” says Ralph Cantave, “It’s up to us, and we should do something about it.”